These Bones Were Made for Swingin’

Since the famous ape skeleton
dubbed Lucy was discovered in
1974, researchers have debated how
much time she spent in trees. It’s an
important question since evolutionary
paleontologists believe Lucy is
an ancestor of modern humans. They
believe the shape of her big toe, in
particular, is strong evidence that she
walked upright on two feet. And the
more time Lucy spent walking, rather
than climbing trees, the closer seems
her connection to humanity.

But recent findings seem to indicate
that the many tree-climbing aspects of
Lucy’s anatomy, such as her long arms,
curved fingers, and upward-angled
shoulder blades, are not simply leftovers
from a chimp-like evolutionary
past. Using high-resolution CT scans
of the skeleton, a team of researchers
in Texas has concluded that Lucy probably
died from falling out of a tree. The
fractures in her bones appear consistent
with a fall, not trampling or burial
of her bones under heavy material in
the years since her death. And since
Lucy lived on the level plains of Africa,
the only place she could have fallen
from would be a tree.

That’s not unreasonable, even if
Lucy was a walker, since she’d still
need to sleep in the trees for safety
from predators. However, another
discovery adds weight to the idea of
a tree-centered life. Lucy’s thick arm
bones show that the relative strength
of her arms compared to her legs is
more like that of a chimpanzee than
a human. She must have spent a lot
of time climbing and swinging to
develop such strong arms. 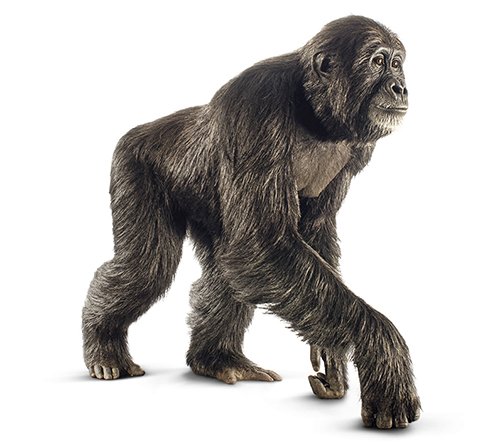 Reconstruction of the Lucy fossil from a creationist
perspective, courtesy of the Creation Museum

Neither discovery is likely to end
the debate about how much Lucy truly
walked. Evolutionary researchers are
too committed to a human-like ape to
let Lucy go so easily.

Her bones aren’t a concern to
biblical creationists. Genesis assures
us that God created apes and humans
separately on Day Six of Creation
Week. So whether an ape preferred
to waddle on the plains or to swing
from branch to branch (and the evidence
seems to lean heavily toward
the latter), she did not swing in
humanity’s family tree.

Piecing Together a Human-Like Ape

What did the fossil creature known as Lucy,
claimed to be an ape-human intermediate,
look like when alive? The problem is that the
longer bones are fragmented. If a scientist
believes Lucy was a link between apes and
humans, he could close the gaps between her
arm bones and lengthen the gaps between
her leg bones to give her human-like
proportions. But the bones fit together just
as well with ape proportions.