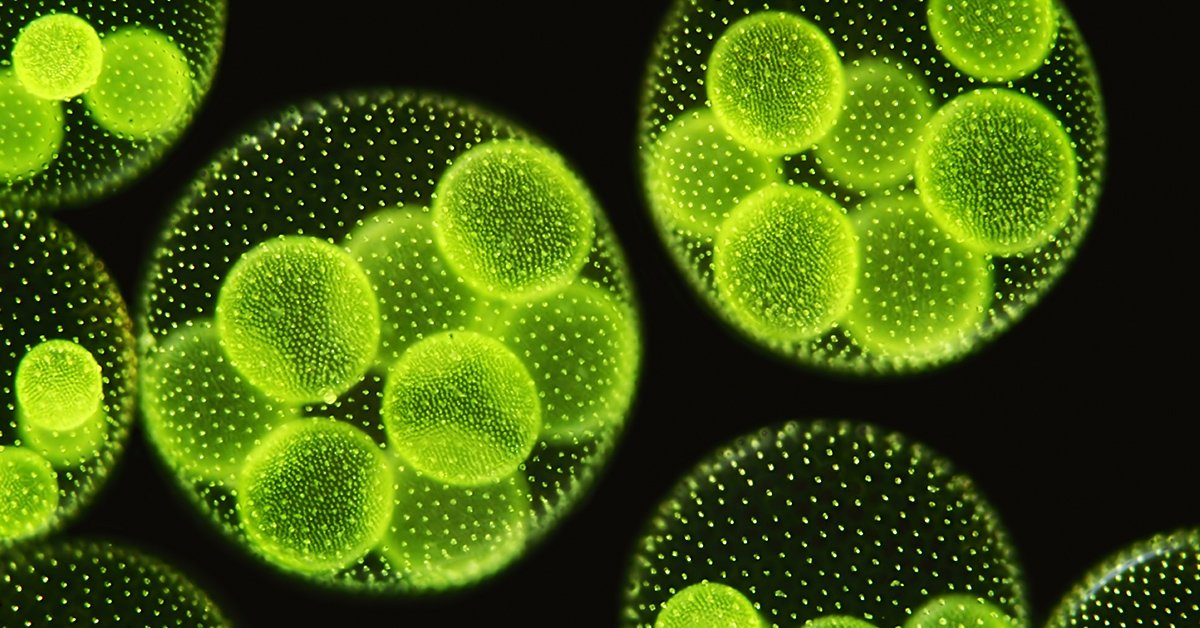 Ever heard of Volvox? It may not be in the next Olympic lineup, but it will beat anything on their program. This single-celled wonder performs masterful pirouettes flawlessly every day—without fanfare—in your local pond scum.

Algae are among the most abundant creatures on earth, growing rampantly in
lakes, puddles, and even aquariums. The word algae usually brings to
mind stagnant ponds covered with green sludge. Contrary to their foul reputation,
algae are amazingly beautiful, diverse, and vital to life. They fill the seas,
whether as solitary individuals or as gently swaying “kelp forests,” which feed
an immense variety of hungry ocean-going creatures.

Under the microscope, algae populate a marvelous world of light-gathering,
twirling, and spinning creatures. One of the most fascinating is Volvox. Just
barely visible as a pale green dot to the human eye, under a microscope they
appear like spherical, translucent spaceships, composed of thousands of dancing
algae cells sailing through the water.

For
decades microbiologists have been baffled over how these cells cooperate without
a brain or even a single nerve cell to guide them.

A closer inspection shows a small biological wonder, a “colony” of up to thousands
of individual “rowing” cells working together to move the floating ship. For
decades microbiologists have been baffled over how these cells cooperate without
a brain or even a single nerve cell to guide them.

Even more puzzling, cells that are separated from the colony look just like
any other single-celled algae, with two flagella (spinning whiplike propellers
common in many one-celled organisms) and an eyespot (a basic “eye” which senses
light). In a pond or the ocean, these single-celled algae would get lost in
the crowd.

But this is not the case with a Volvox. The individual algae cells work together
to form a hollow sphere, and they coordinate their flagella so that the Volvox
moves in one direction.

How is this possible? You would expect each side of the sphere to cancel the
other out. Furthermore, why doesn’t every eyespot point the ship in a different
direction?

Recently, microbiologists noted that the cells with the most sensitive eyespots
line up toward the front of the sphere. Then all the algae cells point their
flagella toward the back.

Okay. Amazing. So how does the Volvox turn?

Volvox never stops swimming. It can respond to a change in light by turning
quickly; the cells with eyespots nearest the light shut off their propellers,
and the active propellers cause the Volvox to turn toward the light.

All of this activity requires a complex system of biochemical communication
between each eyespot and the flagella propellers. Although Volvox is supposed
to be a simple creature, this complex biochemistry and cell-to-cell communication
still mystifies scientists. Volvox is just one more example showing how God
created his creatures to work together to serve His purposes.

Next time you see pond scum, thank the Lord for these beautiful reminders of
His wisdom and provision for all living things (Proverbs 8:30–31)!

Dr. Joe Francis, chairperson of the the science and math
departments at The Master’s College, earned his PhD from
Wayne State University and completed a post-doctoral
fellowship at the University of Michigan Medical School.
Dr. Francis also teaches for Liberty University Online.