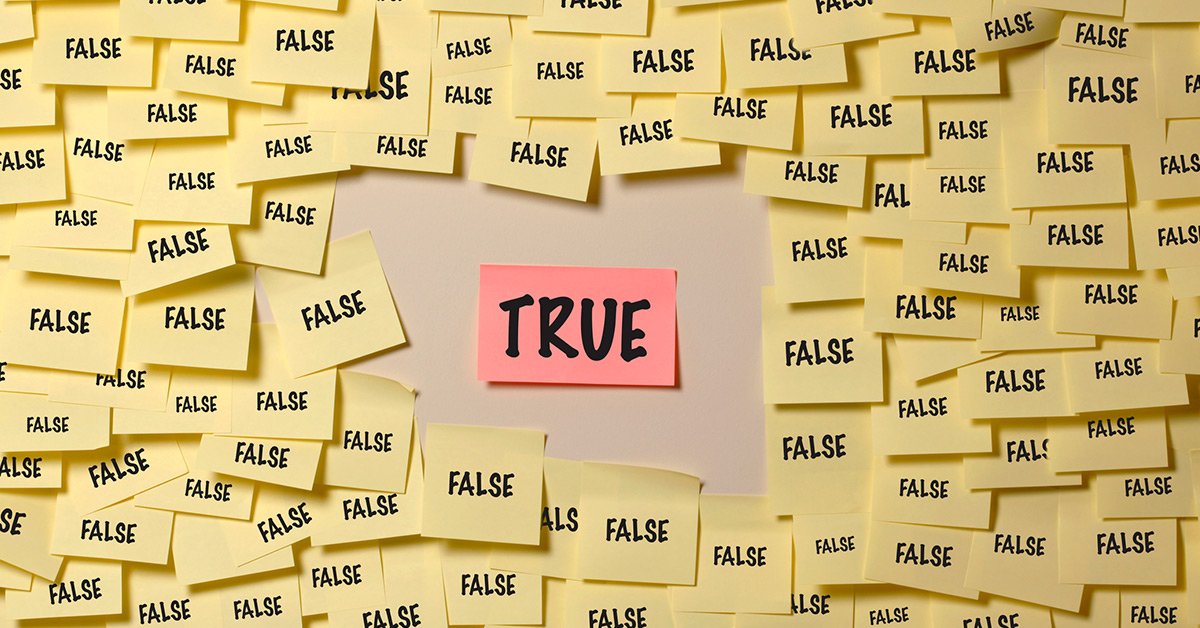 Recently, Snopes, a popular website, disseminated false information with the posting of an anti-Christian commentary with an agenda—an article which had not been fact-checked. Snopes.com posted a piece entitled “Why Creationism Bears All the Hallmarks of a Conspiracy Theory.” This article made many false accusations and disseminated false information about Answers in Genesis, me, and other creation–apologetics ministries.

They did exactly what they tell others not to do: they published an article without fact checking.

How could a supposed fact-checking group get away with this? Easy. At the top of the article, an editor stated, “This content is shared here because the topic may interest Snopes readers; it does not, however, represent the work of Snopes fact-checkers or editors.” In other words, they did exactly what they tell others not to do: they published an article without fact-checking. They tried to justify posting the hostile commentary by stating it’s an article they considered (without any fact-checking for themselves) to be of interest to their readers. Obviously, to them, it’s ok to pass along information that hasn’t been fact-checked, but nobody else should dare do such a thing! What utter hypocrisy.

Because this article contained enormous amounts of false information and an obvious anti-Christian agenda, Answers in Genesis had our publicist contact Snopes by email, stating, “I represent Answers in Genesis, which would appreciate the chance to respond to the ‘creationism is conspiracy theory’ article.”

How did Snopes respond? “Thank you for contacting Snopes! This is a hosted article. You will have to contact the Associated Press directly to ensure delivery of your message.”

Snopes holds others to a particular standard regarding fact-checking, but not for themselves. Why?

So Snopes obviously didn’t want anyone fact-checking an article they published that was not even fact-checked by them! What a complete brush off—and a double standard. Snopes holds others to a particular standard regarding fact-checking, but not for themselves. Why? I suggest this is because this article had a very obvious anti-creationist, anti-Christian agenda. After all, it was written by an ardent atheist known for his active opposition to creation teaching. This makes one wonder how much “fact”-checking is happening at Snopes with other articles and if they are driven by a similar agenda (i.e., being hostile towards Christian/conservative causes).

Who Is the Author?

The author of the article in question is Paul Braterman, Hon. Research Fellow; Professor Emeritus in Chemistry at the University of Glasgow in Scotland and who used to teach in America. On his website, Braterman admits, “I don’t often talk about the fact I’m an atheist.” On his site, some of his statements include, “We don’t derive our morality from God. None of us do. We derive it from social norms, and our shared humanity, and then use gods to rationalise it … No, I’m not going to give you a recipe for finding meaning. You have to find your own . . . I have seen, and heard of, horrible things, and if I did believe in God, I would indeed hate him.”

Braterman is well known in the UK for actively opposing creation teaching in schools. For instance, in 2014 he supported a petition to the Scottish Parliament from the atheist group the Scottish Secular Society that declared, “Calling on the Scottish Parliament to urge the Scottish Government to issue official guidance to bar the presentation in Scottish publicly funded schools of separate creation and of Young Earth doctrines as viable alternatives to the established science of evolution, common descent, and deep time.” Braterman just doesn’t want students even hearing about creation.

Here are just a few highlights from our own fact-checking of his article. You can read a much more detailed response to Braterman’s article in a piece written by AiG’s Bodie Hodge, “Fact Checked: No Conspiracy Here (But a Lot of Fallacies There).”

The title of the article, “Why Creationism Bears All the Hallmarks of a Conspiracy Theory,” is a problem from the start. It is what’s called a “question-begging epithet fallacy.” It is an attacking title with emotive language meant to get people thinking negatively about creationists from the beginning. The author then commits the “guilt by association fallacy.” Braterman mentions things like QAnon, the “myth of the stolen US election,” “attack on the US Capitol Building,” and “young Earth creationism” all in the same paragraph. He is deliberately trying to align creationist organizations like Answers in Genesis with events and an organization we have had absolutely nothing to do with, as any true fact-checker would be able to quickly find out.

Nobody at Answers in Genesis or any other member of the mainstream creation movement has alleged any kind of secret nefarious plot to keep information from the public.

The author, after his attempt at defining young-earth creation, claims it has all the marks of a conspiracy theory. “It meets all the criteria, offering a complete parallel universe with its own organisations and rules of evidence, and claims that the scientific establishment promoting evolution is an arrogant and morally corrupt elite.” According to Merriam-Webster, a conspiracy theory is “a theory that explains an event or set of circumstances as the result of a secret plot by usually powerful conspirators” or “a theory asserting that a secret of great importance is being kept from the public.” Now, nobody at Answers in Genesis or any other member of the mainstream creation movement has alleged any kind of secret nefarious plot to keep information from the public. Such a charge is laughable. It’s really atheists like Braterman who don’t want creationists having any opportunity to be heard, as they stifle the dissemination of information.

The author claims Answers in Genesis (specifically myself) refers to evolution as “the work of Satan.” But the article he links to as evidence of this claim includes no reference to me making any statements about Satan! Again, that can be easily fact-checked.

Braterman then points to several prominent examples of frauds by evolutionists over the decades and accuses creationists of focusing too heavily on errors that eventually were corrected. While such frauds are certainly mentioned in a few of the thousands of articles on the AiG website, they are certainly not used heavily as part of our teaching. I personally have rarely mentioned these frauds over the past 40 years of speaking and writing, because that’s not the main thrust of those groups in the biblical creation movement.

Braterman’s argument breaks down anyway when he actually begins to defend the notorious Haeckel’s embryos. These fraudulent drawings purported to compare embryos of different organisms at the same stage of development, supposedly showing how the evolutionary history of life was repeated during development. It turns out, the drawings were completely fraudulent. Braterman admits Haeckel’s original drawings were incorrect, but he still says they were correct in depicting gill slits and tails on humans. Braterman is not only incorrect scientifically, but the abstract of the paper he links to as he attempts to point out Haeckel’s flaws states, “The wide variation in morphology among vertebrate embryos is difficult to reconcile with the idea of a phylogenetically-conserved tailbud stage . . .” In other words, the evolutionary history of an organism is not preserved in the developmental stages. In fact, the supposed “gill slits” in human development have nothing to do with respiration (as gills do) but are clefts that form into the auditory canal, parathyroid glands, and other structures. Simple fact-checking would have found this out rather quickly.

Braterman also fails to explain that the word “science” means “knowledge,” and that there is a big difference between “historical science,” or beliefs about the past, and “observational science” that is repeatable and helps build our technology.

Braterman claims creationists are “dangerously opposed to science” and that the AiG website and the websites of our themed attractions are “completely hostile to science.” Fact check: this alleged hostility to science is simply not true. If it were true, creationists would reject technology.

I began my career as a public school science teacher in 1975, and I was an ardent creationist. I was approved by the university I attended and the education system to teach science. As well as my science degree, I have a qualification in science education. Also, Answers in Genesis employs several scientists with PhDs from prestigious universities, including the Ivy League schools of Brown and Harvard. There is no way a secular university would have granted these degrees to our scientists if they were “hostile to science.”

AiG began as an independent organization in Australia that started in our home in 1977, before I even knew about ICR as an organization.

Braterman also gets our history wrong, stating, “[The Genesis Flood book] provided the inspiration for Morris’s own Institute for Creation Research, and for its offshoots, Answers in Genesis . . .” Fact check: AiG began as an independent organization in Australia that started in our home in 1977, before I even knew about ICR as an organization. Names were changed over the years: we adopted the Answers in Genesis name in the USA in 1994, and the Australian organization I founded also changed to the same name at that time.

There is so much more we can respond to in this anti-creationist, anti-Christian hit piece that Snopes published without bothering to fact-check. One can only assume that editors at Snopes have the same agenda as the atheist Braterman: a quest to malign creationists/Christians. As I mentioned earlier, here is a more detailed response to the anti-Christian article: “Fact Checked: No Conspiracy Here (But a Lot of Fallacies There).”

So there you have it. Snopes published an anti-creationist, anti-Christian propaganda piece—written by an atheist who is a well-known opponent of creationists—without fact-checking it. In other words, Snopes does unto others what they will not allow to be done to themselves. I trust this helps open people’s eyes to the realization that Snopes cannot be trusted as a true fact-checking site.