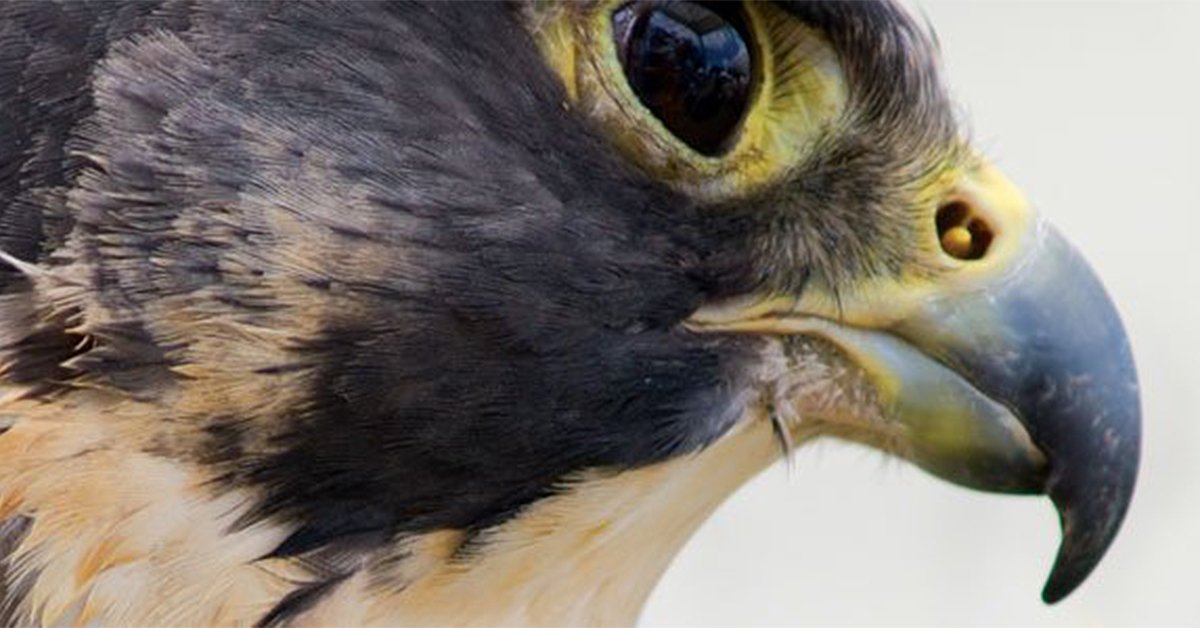 The fastest animal on the planet doesn’t spend much time on the ground. The peregrine falcon spends most of his days flying high in the air, searching for food. But his ability to flap isn’t what makes him so special; it’s his fall. During a steep dive, called a stoop, the falcon exceeds 200 miles an hour (322 km/hr).1

“God created every winged bird according to its kind” and “saw that it was good” (Genesis 1:21). We can still see each of these good designs today.

To accomplish his unique fall, the peregrine falcon is supplied with a teardrop body shape, swept-back wings, and stiff feathers that minimize air resistance. The falcon has a powerful body and a pulse rate that reaches 900 beats per minute. But even these designs aren’t enough to explain his death-defying dive.

How can his eyes focus on prey a mile away and make rapid-fire adjustments while being blasted by air?

High-speed flight presents special challenges. For example, how can his eyes focus on prey a mile away and make rapid-fire adjustments while being blasted by air? In three ways. First, the peregrine eye has 4–5 times the number of visual cells (called photoreceptors) as our eyes. This extra visual detail allows the falcon to make split-second adjustments. Second, the falcon eye has an extra lid, called the nictitating membrane, which prevents wind damage. Essentially, the membrane serves as a see-through eyelid, which can be closed without limiting his visibility. Third, beneath his eye is a dark patch, similar to a football player’s “eye black.” This shading minimizes glare.

An even greater flight hazard involves breathing. During a dive, the high-speed airflow over the falcon’s beak should prevent normal breathing. Some sources also claim that so much pressure builds inside the lungs that it would cause most animal lungs to burst,2 although this claim is difficult to verify. To compensate, the falcon has specialized cone-shaped bones protruding from the entrance of its nostrils, called baffles. These bones control the flow of incoming air so the falcon can breathe it safely.

Military jet engines employ a similar design. When a jet flies at supersonic speeds (faster than sound), the engine can “choke.” Air moving toward the engine appears to hit a wall of resistance and flows around, instead of through, the engine, causing it to stall. So engineers fashion a cone in the opening of the engine, similar to the falcon’s nostril. With this addition, outside air can safely enter the engine. Cones and their variations, called intake ramps or inlet cones, are visible on the front of most large jet engines.

Even at its top speed of 200-plus miles per hour, however, the falcon would not encounter the shock waves that supersonic jets must deal with. So, although each design serves to regulate air intake in some way, the similarities are largely superficial, and it is difficult to verify that the peregrine falcon’s nose directly inspired jet engine design, despite reports to the contrary.3

Nature is rich with useful ideas and solutions to complex engineering problems, from medicines to jet engines, all provided by the Creator from the beginning of time. One by one, we are discovering these ideas and applying them to modern technology. The endless examples of intelligent design clearly reveal the fingerprint of our personal, loving Creator.

Dr. Don DeYoung is an emeritus professor of physics at Grace College, Winona Lake, Indiana. He is currently president of the Creation Research Society with hundreds of members worldwide. His website is DiscoveryofDesign.com.