The circus for most of its history regularly featured numerous displays of diseased or deformed humans purported to document Darwin’s theory of human evolution (Bogdan 1988; Cook 1996). In the annals of sideshow performance, one of the most famous exhibits to “prove” evolution was Schlitzie (1901–1971) a microcephalic (Cantrell 2019). Schlitzie “was one of the top draws in [that] imitators, some even using his name, began to crop up here and there.” (Griffith 2019, 77, 165). Sometimes people with microcephalism were called pejorative names such as “pinheads” or “coneheads.” They had abnormally small brains, were usually intellectually disabled, and displayed many superficial purported ape-like features that made them candidates for the Darwin’s “missing link” label (Snigurowicz 1999). 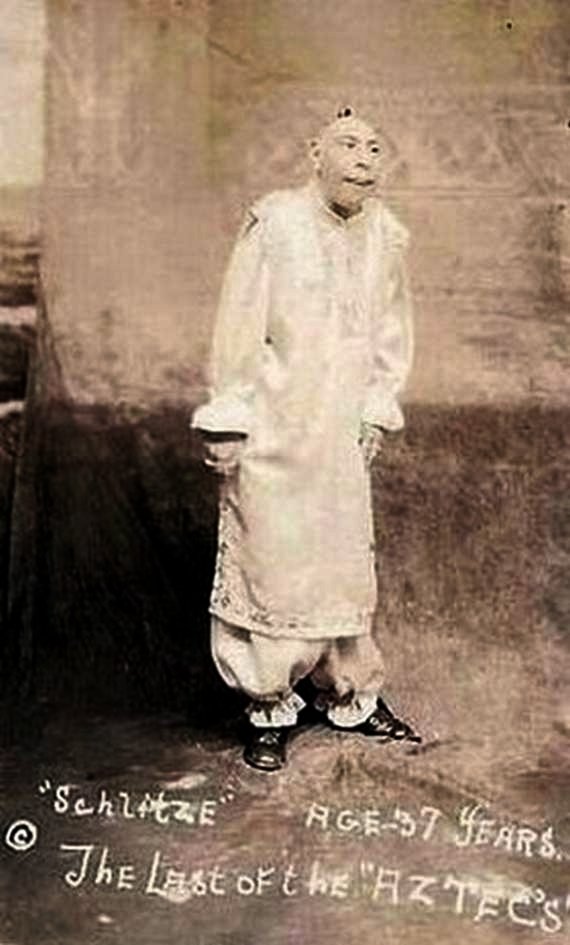 Schlitzie billed as “The Last of the Aztecs” circa 1930s. Photo credit unknown, via Wikipedia Commons

Schlitzie was also billed “the missing link between Ape and Human” and as “Darwin’s missing link” or even a “Half Monkey, Half Human” man, but mostly “the Missing Link scientists have been seeking since Darwin . . . the Missing Link sought by scientists the world over” (Griffith 2019, 5, 10, 52, 61, 167). He also was for a time billed as Schlitzie “The Monkey Girl” and “The Last of the Incas” (Hartzman 2005, 210). Schlitzie even had a major appearance in the very successful but controversial 1932 film Freaks, directed by Tod Browning, the director of Dracula. He also appeared in the 1941 film Meet Boston Blackie (Hunter 2014, 40).

Among the many microcephalics featured in sideshow acts were also Bartola and Maximo, Godino and Apexia, Hettie and Tain, and Zip (born William Henry Johnson): Barnum & Bailey’s claimed “missing links” between man and monkeys (Hunter 2014, 40–41). These were openly depicted on advertising posters as “nothing less than the ‘missing link’” predicted by Darwin (Kunhardt 1995, 149). Barnum, along with other purveyors, even dishonestly misled visitors to conclude his displays were examples of valid scientific evidence for Darwinism. Many of the advertisements for these exhibits were specifically designed to satisfy the public’s curiosity about Darwin’s theory of evolution. Historians have concluded that the validity of Barnum’s missing links was “strengthened by an unwitting Barnum ally, the English scientist Charles Darwin” (Kunhardt 1995, 149). In addition to Schlitzie, Barnum displayed several other “missing links,” who also suffered from an abnormally small brain associated with microcephalism (Homberger 2005).

One of the most popular “Darwin’s missing links” was Schlitzie, a microcephalic featured in freak shows throughout much of the Western world.

Schlitzie worked for just about every popular circus in existence during his lifetime, including the largest, most popular shows, Barnum & Bailey and Ringling Brothers. Throughout Schlitzie’s life, he was traded, sold, and lent to various circus owners. While more able-minded performers might have had more say in their work, those with severe intellectual disabilities had little choice (Durant 1957). Schlitzie was reported to have enjoyed his many travels to visit new places, including some as far away as Venezuela.

The Darwin’s “Missing Link” title, combined with the unusual appearance of certain people, brought swarms of people to circus sideshows. Although Schlitzie was not of African heritage, no small number of those displayed as missing links were of African descent, such as Zip and William Henry Johnson (Lindfors 1999). Schlitzie’s most recognizable feature was his small head caused by his microcephaly disorder. Microcephalics have skulls that are far smaller than a typical skull, often conical shaped toward the back crown of the head.

Schlitzie was also billed “the missing link between Ape and Human” and as “Darwin’s missing link” or even a “Half Monkey, Half Human” man

Schlitzie’s head was shaved to emphasize his small skull, and his hair was cut specifically to form a ponytail to exaggerate the point at the top of his skull (Hartzman 2005, 211). Those physicians who recognized the true nature of his deformity used Darwinian eugenics to conclude “in the future, mark my words, defectives like this will be weeded out by eugenics before they can be born,” a prediction that turned out to be true in some countries such as Iceland (Griffith 2019, 115). Iceland encourages evaluation of Down Syndrome (Trisomy 21) in fetuses and abortion if so diagnosed. As a result, very few children with Down Syndrome are born. This is another sad Darwinian legacy wherein humans are viewed as inferior for various reasons and deemed unworthy of proper human dignity or even life. This is a result of rejecting the teaching in Genesis that all humans are equal before God, all descendants of Adam and Eve. It is also the result of rejecting God’s Word: “Then the Lord said to him, ‘Who has made man’s mouth? Who makes him mute, or deaf, or seeing, or blind? Is it not I, the Lord?’” (Exodus 4:11). Having worked with Down syndrome children, I can attest they are some of the most delighting, loving children on earth, though their value—all humanity’s value—is in having been created in God’s image.

Schlitzie was only about four feet tall and his cognitive skills were about those of a three- to four-year-old child, so he seemed much younger than he really was. His communications were largely jabbering that usually made no sense. Nonetheless, Schlitzie was a favorite with the fans and caretakers: “Like a 3-year-old frozen in time, each day brought new wonders to Schlitzie. His childlike exuberance, boyish innocence, and unconditional love for everyone he met, endeared him to everyone he came into contact with” (Cantrell 2019). While human exploitation is evil, in the world that was in the past, the circus was probably one place where folks like Schlitzie had a chance of getting at least some decent and loving care.

One report of Schlitzie’s behavior was by an 18-year-old, Wolf Krakowski, then working for the Conklin and Garrett Shows at the Canadian National Exhibition in Toronto in the summer of 1965, where he “first came to know Schlitzie, who was billed as ‘The Missing Link.’” Krakowski recalled, “Schlitzie, like all children, craved tenderness and affection. He would snuggle up to me and I would put my arms around him. This simple contact and warmth caused him to moan and to weep” (Krakowski 2019). This reminds one of the scriptural admonition: “Do nothing from selfish ambition or conceit, but in humility count others more significant than yourselves. Let each of you look not only to his own interests, but also to the interests of others” (Philippians 2:1–4).

Like many sideshow “missing links” of the time, Schlitzie’s life outside the circus was difficult. His appearance and behavior made it difficult to exist in a world that offered few protections for the physically and mentally disabled.

Like many sideshow “missing links” of the time, Schlitzie’s life outside the circus was difficult. His appearance and behavior made it difficult to exist in a world that offered few protections for the physically and mentally disabled. Nonetheless, Schlitzie performed for decades and made a lasting impact on both the circus industry and the world (Cook 1996). He is reported to have loved his life in the circus and was well cared for by his various guardians and nurses. When his owner died in 1965, Schlitzie ended up in a psychiatric hospital. The psychologist said he would not last long in the hospital and needed the affection and adoration of the side-show audience (Hartzman 2005, 211). He lived another six years, until his death on September 24, 1971, at the age of 70.

Some reports say he was born somewhere in the Yucatan, though this was likely a sideshow ploy to attract an audience. Schlitzie was once even billed as “The Last of the Aztecs,” presumably for exotic appeal. Accounts differ, but one claims he was born to a wealthy family in Santa Fe, New Mexico (Hartzman 2005, 210). As was once common in the early 1900s, the family sold Schlitzie to a traveling circus where he began his life-long career as a sideshow attraction.

Microcephaly can result from several causes including genetics, even extreme fetal alcohol syndrome. Some sources claim Schlitzie was born a microcephalic, others claim he developed the condition when his body grew but his head did not. His hands and feet appear to be proportionate to his small body. Aside from accounts written up in books on the circus, we do not have a family medical history or other background information.

As far as is known, he was never carefully examined by a doctor until late in his life, when medicine was far more rudimentary than now. Although Schlitzie’s few medical records list him as male, circus promoters often advertised him as female, with names like “The Monkey Girl.” Because Schlitzie was incontinent and wore diapers, dresses made it easier for his caregivers to change him. Some assert that Schlitzie was not incontinent until later in life, and some early photos show him wearing pants under his dresses, which would have defeated the purpose of a dress if incontinence were an issue.

Female sideshow performers were a bigger draw then, and since Schlitzie’s gender wasn’t immediately obvious to audiences, they may have dressed him in dresses to draw more interest in his act (Adams 2001). This was a common practice at the time because circuses typically followed a specific route each year, and owners used new attractions to bring in new customers to cities they had been to before (Bradna and Spence 1952). Other male microcephalic performers of the time were referred to as male, thus this practice seems to have been unique to Schlitzie.

How many people were fooled by the exploitation of deformed or disabled humans can only be speculated, but these claimed ape-men no doubt reinforced the belief in the ape ancestry of modern humans.

How many people were fooled by the exploitation of deformed or disabled humans can only be speculated, but these claimed ape-men no doubt reinforced the belief in the ape ancestry of modern humans to the unsuspecting public at that time. The purveyors of the myth that viewers were actually viewing some link to an ape ancestry no doubt knew better, but the myth was necessary to maintain the attraction that helped these “Missing Links” achieve their remarkable success. These circus displays are only one example that, in some small way, helped to convince some of the public that their perception that humans have always been humans was incorrect. Even more egregiously, this and other cases, like Ota Benga’s, showcase social Darwinism’s dehumanizing influence that has lasting repercussions into persistent racism and today’s abortion and euthanasia arguments.

Bradna, Fred and Hartzell Spence. THE BIG TOP: My 40 years with The Greatest Show on Earth. New York, NY: Simon and Schuster, 1952

Krakowski, Wolf. Quoted in Betsy Kaplan, “Finding Humanity At The Side Show,” May 1, 2019, https://www.wnpr.org/post/finding-humanity-side-show.