A skeptical social media post is making the claim that the lesser mole-rat (one of several blind mole rats) is evidence against intelligent design, and implicit in the charge is that this somehow invalidates there being an all-wise God, the intelligent designer of all of creation. One example of the post is below.

A friend of mine who’s an evolutionist used this example (Lesser Mole Rat “Spalax leucodon“) to disprove the idea of an intelligent design. The reason is that this mole rat Is blind and can only use the eyes covered under his layer of skin to differentiate between day and night.

Before debunking this completely unfounded and illogical claim, we should familiarize ourselves with the blind mole-rats.

Before debunking this completely unfounded and illogical claim, we should familiarize ourselves with the blind mole-rats. It should be noted that there are several different taxonomic groupings of the blind mole-rats (BMRs). In point of fact, the genus Spalax mentioned in the above social media post is no longer considered valid for at least three species of blind mole-rats.1 The new genus name for the above lesser mole-rat is now Nannospalax leucodon.2 Although even more recent taxonomy has attempted to label Nannospalax a superspecies.3 Popular names (in addition to lesser mole-rat) are varied with this particular mole-rat also being called the European blind mole-rat (hereafter abbreviated BMR) and the Mediterranean BMR. Two other species in this genus exist, N. ehrenbergi, the Israeli BMR, and N. xanthodon (also called N. nehringi), the Anatolian BMR.4 All of the Nannospalax BMRs are very similar and N. xanthodon and leucodon appear to have hybridized with each other either in the wild.5 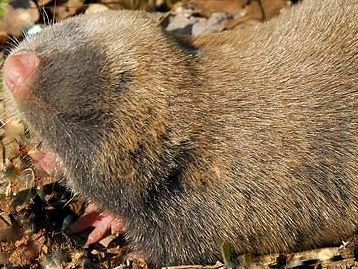 All of the BMRs are fossorial (burrowing) rodents that spend most of their time underground in burrows and tunnels. In fact many papers list them as living entirely underground. But recent research has found that BMRs do surface frequently for a variety of reasons. Although primarily tuber and plant-root eaters, they also will venture above ground for vegetation, especially leaves and plant stalks.6 They will also not shy away from migrating to different areas where food is more plentiful for foraging plants and sometimes even insects above ground.7 When caught above ground by a predator or even a curious human, they will face the threat, open their mouth wide to show off their large teeth, and even grunt loudly and gnash their teeth.8

Blind mole-rats primarily use their head, snout, and especially their mouth (with its huge incisor teeth) for digging tunnels.

Unlike many burrowing underground-living rodents that use their claws, blind mole-rats primarily use their head, snout, and especially their mouth (with its huge incisor teeth) for digging tunnels. Their mode of excavation has been described as “chisel-tooth diggers, using their lower incisors for burrowing and the lower jaw as a shovel.”9 N. Leucodon has been observed doing this even in scientific observations going back to the 1930s.10 And the three species of Nannospalax BMRs don’t just live in shallow subsurface burrows. They have been known to dig and live over 5 ft. underground (62 inches or 160 cm). And their burrows have been recorded to extend laterally for over 35,800 square feet (3328 square meters).11 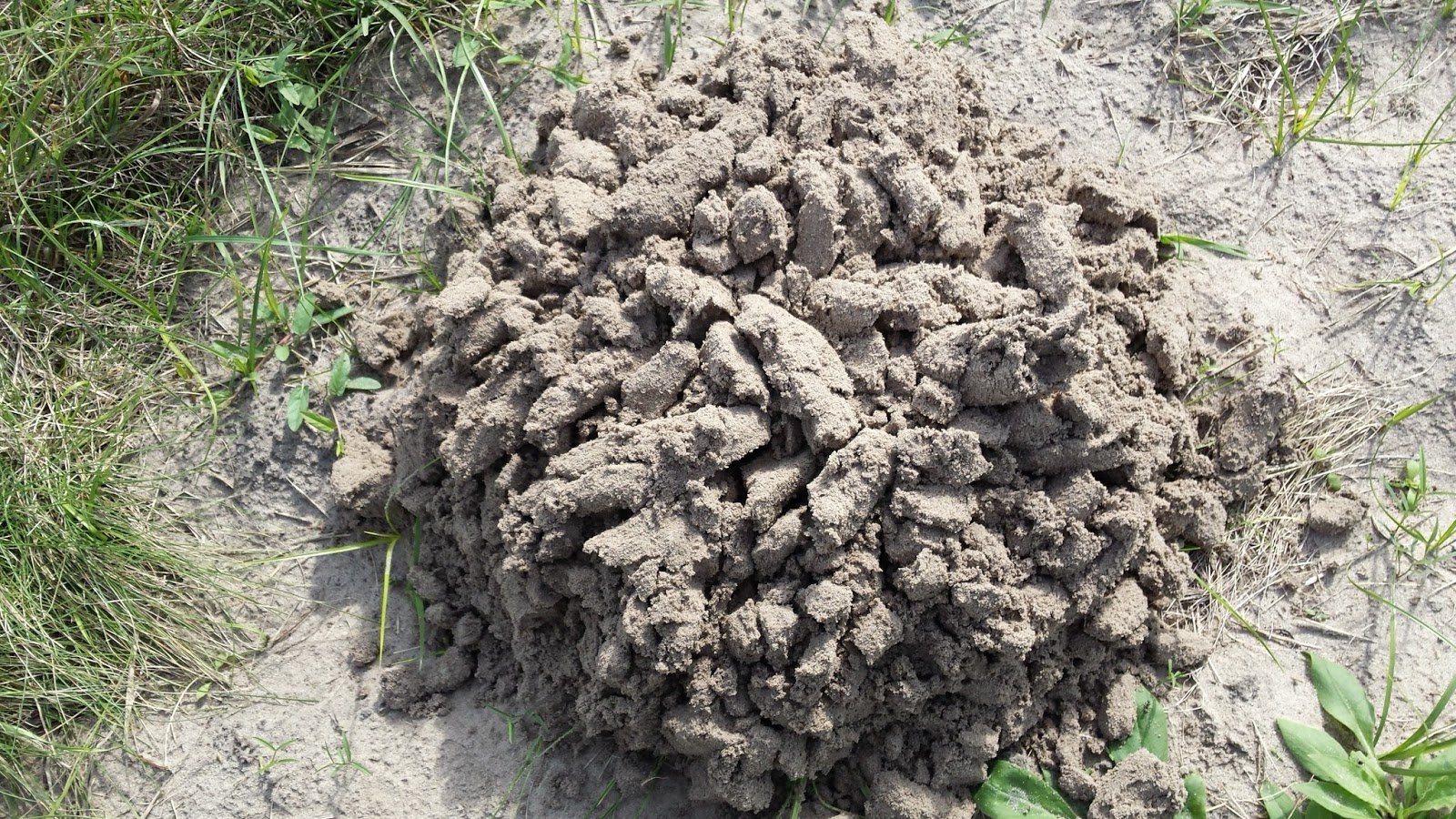 It had been noted by several researchers in the field that no Spalax or Nannospalax species had ever been known to have a tumor in over 40 years of observations.

It had been noted by several researchers in the field that no Spalax or Nannospalax species had ever been known to have a tumor in over 40 years of observations. So one study decided to take the Israeli blind mole-rat Nannospalax ehrenbergi (using the older genus name Spalax for both genera of BMRs in the cited paper) to test this out. The results prove that this BMR is very resistant to cancer, even when it is chemically-induced in the lab.13 Not stopping there, the researchers decided to see if this resistance to cancer would actively attack human cancer cells. Human hepatoma-derived Hep3B cells as well as breast cancer MCF7 cells were tested. Obvious inhibition of cancer-cell growth was found when Hep3B cells were co-cultured with N. ehrenbergi normal lung and skin fibroblast cells (the most common mammalian connective tissue cells, which are crucial in wound healing) compared with controls of rat fibroblasts and later tests of naked mole-rat and the Spiny rat genus Acomys. According to one of the researchers on the project:

Most intriguing, fibroblast cells only from Spalax [used generically of all BMRs], but not from other species [of mole-rats or other rodents], inhibit growth and kill cancer cells, but not normal cells, from various tissues and species, most importantly a wide range of human cancer cells. This is exhibited in both co-culture system or by exposure to factors secreted into conditioned media harvested from Spalax fibroblasts. Decreased cancer cell viability and proliferation, reduced colony formation in soft agar, disturbed cell cycle progression, chromatin condensation, nuclei deformation, and mitochondrial fragmentation were reproducibly observed. . . . .

The study may attest to be a breakthrough in the conservative paradigm of cancer research, completely dependent on laboratory, inbred rodents. Achieving this goal will open new horizons in cancer studies and may prove that the long-lived, hypoxia- and cancer-tolerant Spalax is a significant biological resource for biomedical research as an organism for treatment and prevention of cancer in humans.14

Just the year before in 2012, a previous study found that blind mole-rat cells were able to eliminate precancerous cells by secreting a protein called interferon-beta.15 Further studies since 2013 have attempted to isolate the mechanism(s) that enable BMRs to fight off cancer.

In a 2018 study, researchers decided to look at adipose‐derived stem cells (ADSCs) from N. ehrenbergi. Since ADSCs are recruited by cancer cells for tumor growth, the researchers postulated that if blind mole-rat ADSCs were inhibited in their response they would not support tumor growth. They turned out to be right: it seems like the BMR would not support tumor growth compared to the rat control animals. The slow response of BMR ADSCs suppresses tumor progression.16

Another 2018 study found that BMR skin cells show little effect to high doses of UV radiation. They also found that BMRs can tolerate heavy doses of chemotherapy drugs with minimal effect. In both cases, rat skin cells were used as controls and suffered heavy damage and cell death.17

But What About Those Eyes?

Blind mole-rats are aptly named: they are totally blind. Yet this in no way is evidence of poor design.

Blind mole-rats are aptly named: they are totally blind. Yet this in no way is evidence of poor design. First of all they do have eyes, but they are covered by an external layer of skin. But it has been found that they do serve a function. In a 1990 study, researchers found that removal of the eyes disturbed photoperiod perception. Or as the mocking social media post put it “can only use the eyes covered under his layer of skin to differentiate between day and night”. But the eyes of mammals also serve other functions besides sight, being an essential intermediate for thermoregulation (the ability to maintain a constant core body temperature), reproduction, and hibernation, all of which require information about changes in photoperiod. In this same study, eye removal also affected thermoregulation. The retinas of BMRs are still functional and produce melatonin which also aids in thermoregulation.18 So much for their eyes being monofunctional.

BMRs have strong tactile and magnetic sensory abilities and produce and utilize seismic vibrations as an effective means to efficiently navigate and find their way.

Then a 2008 study looked to determine how BMRs spatially map an area, building on research from the 1990s to the mid-2000s that showed that BMRs have strong tactile and magnetic sensory abilities and produce and utilize seismic vibrations as an effective means to efficiently navigate and find their way. In the 2008 study, the researchers wanted to see if all of these capabilities would facilitate the mapping of an unfamiliar environment.

Six male and six female Israeli BMRs were put one at a time in a 2m × 2m (6.5 ft. × 6.5 ft.) room with PVC floors, plexiglass walls around the perimeter, and illumination with 300 W bulbs pointing toward the ceiling. Initially the BMRs would slowly travel only around the perimeter, with their sides rubbing against the walls. They would stop often, back up frequently, and sometimes make U-turns. However in each successive lap, speed would increase, stops or back-ups decreased, and the BMRs started first cutting corners and the, by the second to fourth lap, many were crossing the center of the square. This suggested to the researchers that the gradual build-up in the first lap is a process of spatial calibration in which BMRs obtained a sense of the area available for exploration. Then after the build-up phase, BMRs used that calibration as a form of a cognitive map. Interestingly the researchers noted that as the BMRs moved away from the perimeter, their speed of travel actually increased, only slowing down just before they would have bumped into a wall. They also noted that BMRs did better adjusting to lighted conditions than sighted nocturnal rodents. This further validated their hypothesis that BMRs have species-specific perceptual or calibration abilities.19

Because blind mole-rats are primarily mouth diggers, having external eyes (even with lids) would be hazardous to their health.

As has been shown, BMRs are exceptional creatures, intelligently designed to do what they do. Being animals that spend most of their time underground, they have little use for vision. In addition, because blind mole-rats are primarily mouth diggers, having external eyes (even with lids) would be hazardous to their health. The extreme likelihood of soil and abrasion damaging the eyes and causing infection in a creature whose head is in the dirt frequently makes external eyes a detriment to these creatures. They do come above ground on occasion, for foraging, moving, and seeking mates. For a sighted creature, there would be a period of adjustment to the light and disorientation, which could very well prove fatal for a rodent towards the bottom of the food chain. As noted in the above study, BMRs performed better in light than sighted nocturnal rodents, meaning their adjustment to light was much shorter.

God has gifted them with some unique non-visual mapping techniques, as well as made them resistant to hypoxia and cancer.

Creation biologists do not know if blind mole-rats were created blind originally, or if as the result of the curse, mutations have crept in and, with their subterranean lifestyle and habitat, led to atrophy of their sight. But whether specifically created blind or as result of mutation and/or (helfpul) adaptation within God’s provisionally designed genome, the BMRs are still designed perfectly for their environment. In this sin-cursed world, mutations destroy genetic information, but mutations preventing normal eye development would not be a problem for BMRs who usually live in perpetual darkness. Such mutations would not be selected against, because in such darkness, vision would not help the BMR. In fact, functional external eyes would hamper the mole-rat, and likely lead to infection and death. External eyes would therefore almost certainly be selected against. BMRs have been known to live over 20 years, which for a rodent is a long lifespan.20 And God has gifted them with some unique non-visual mapping techniques, as well as made them resistant to hypoxia and cancer. The blind mole-rat is not an example of poor design; rather it is a marvel of God’s creation, and perhaps one day soon, God, who has given man wisdom, will allow his intelligently designed image bearers to figure out the blind mole-rat’s medical mechanisms and use these lowly rodents to help reduce or eliminate cancer in humans.

O LORD, how manifold are your works! In wisdom have you made them all; the earth is full of your creatures (Psalms 104:24)