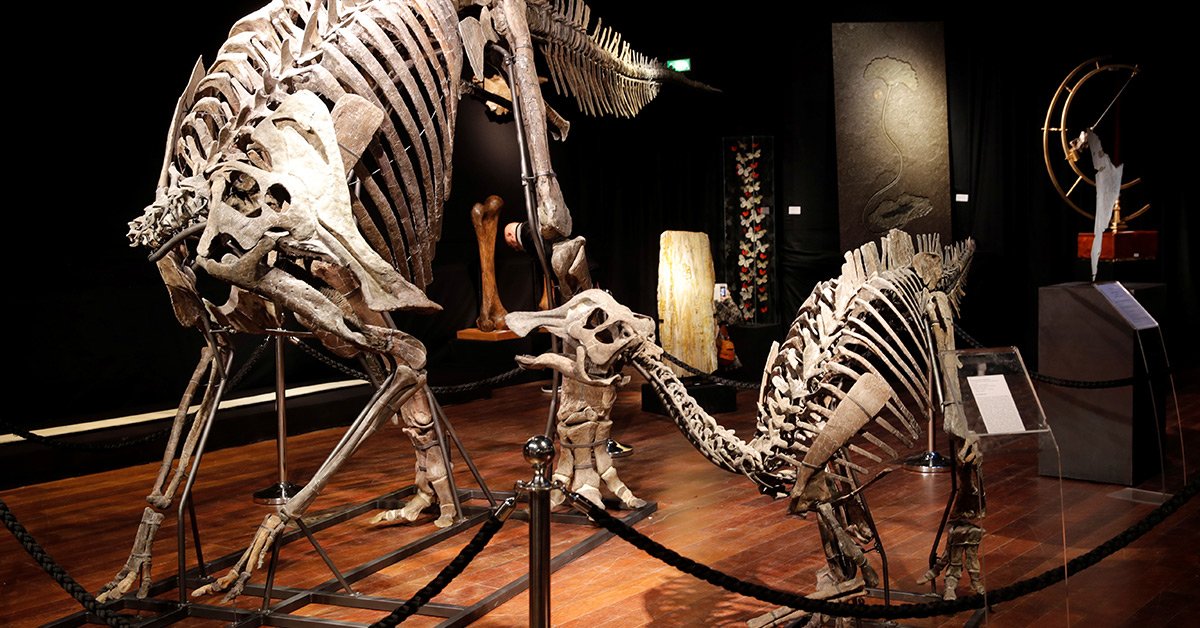 In many juvenile animals, and in humans (up to late teens or early twenties), parts of the skull contain cartilage, which eventually calcifies and fuses into the bone.

Dr. Alida Bailleul, a paleontologist from the Chinese Academy of Sciences and one of the journal’s coauthors, noticed what appeared to be chondrocytes (cartilage cells) when looking at thin sections of the Hypacrosaurus skulls. As it turned out, this was calcified cartilage, and with a closer examination at higher magnifications, she also discovered that there were internal structures resembling nuclei and chromosomes.

To verify her research, she and other researchers, including Dr. Mary Schweitzer of NCSU (the first to find soft tissue and red blood cells, including hemoglobin in a dinosaur bone), performed analyses of bone and suspected cartilage sample with different staining techniques. They also performed similar tests on juvenile emu skulls for comparison. Now, they chose emu skulls because of their belief that birds are dinosaurs. In reality, many juvenile vertebrates have cartilage in their skulls until they reach maturity, so this choice of emus is, in fact, just arbitrary, because of their evolutionary assumptions.

The researchers also tested the microstructures inside the cartilage for the presence of chemical markers consistent with DNA using two stains that bind to DNA fragments within cells. These chemical markers reacted with isolated cartilaginous cells, as opposed to just staining the entire sample. In the press release, Dr. Schweitzer explains further:

“We used two different kinds of intercalating stains, one of which will only attach to DNA fragments in dead cells, and the other which binds to any DNA,” Schweitzer explains. “The stains show point reactivity, meaning they are binding to specific molecules within the microstructure and not smeared across the entire ‘cell’ as would be expected if they arose from bacterial contamination.”

Dr. Bailleul closed out the press release by giving the standard evolutionary spin on these Hypacrosaurus fossils: “It’s an exciting find that adds to the growing body of evidence that these tissues, cells and nuclear material can persist for millions—even tens of millions—of years.” Note that these researchers don’t question the age, but instead postulate some unknown process that supposedly caused the preservation of such tissue and DNA.

In the National Science Review (NSR) journal paper, the researchers postulate on mechanisms that they believe would have preserved cartilage and even DNA fragments for 70 million years. One of their main hypotheses is that calcified cartilage may be a better candidate for biomolecule preservation than bone because it exhibits several factors that contribute to stabilization. Those factors include a more dense extracellular matrix (ECM), a higher mineral content than bone ECM, and extremely low cellular oxygen levels, which they think may reduce or prevent degradation. But keep in mind that there is no evidence for this belief. Cartilage and internal structures like cell nuclei and fragments of DNA cannot last for millions of years.

One somewhat puzzling statement from the NSR paper is the researchers’ mention of the condition of the bones and cartilage at this fossil site:

“Interestingly, all the materials collected at this nesting ground were disarticulated, suggesting that a phenomenon other than rapid burial allowed such exquisite preservation.”

However, does disarticulation (in this case, animal bones and cartilage that are broken, unconnected, and scattered) really argue against rapid burial? In the evolutionary paradigm, yes, for it is assumed to require today’s conditions of animal carcasses slowly rotting for the bones to fall apart and be disarticulated.

Now, this is not the case from a flood geology perspective. The floodwaters didn’t always uniformly dump sediment on top of creatures and bury them whole. A wall of sediment and water hitting a group of dinosaurs with heavy force would do serious damage to their bodies and skeletons, as the whole mass was swept away and buried on the continent some distance away from where they lived. In this way, they could easily be jumbled, battered, and yet still have preserved cartilage and cellular structures. But what this reported discovery of proteins, chromosomes, and chemical markers of DNA in exceptionally preserved dinosaur cartilage really tells us is that these bones and cartilage are not 70 million years old. These animals died and were buried by the flood of Noah’s day only around 4,300 years ago.

This item was discussed on Monday on Answers News with cohosts Dr. Gabriela Haynes, Ken Ham, and Roger Patterson. Answers News is our weekly news program filmed live before a studio audience here at the Creation Museum and broadcast on my Facebook page and the Answers in Genesis Facebook page. We also covered the following topics:

Watch the entire episode of Answers News for March 9, 2020.