The Copernican System & the Bible 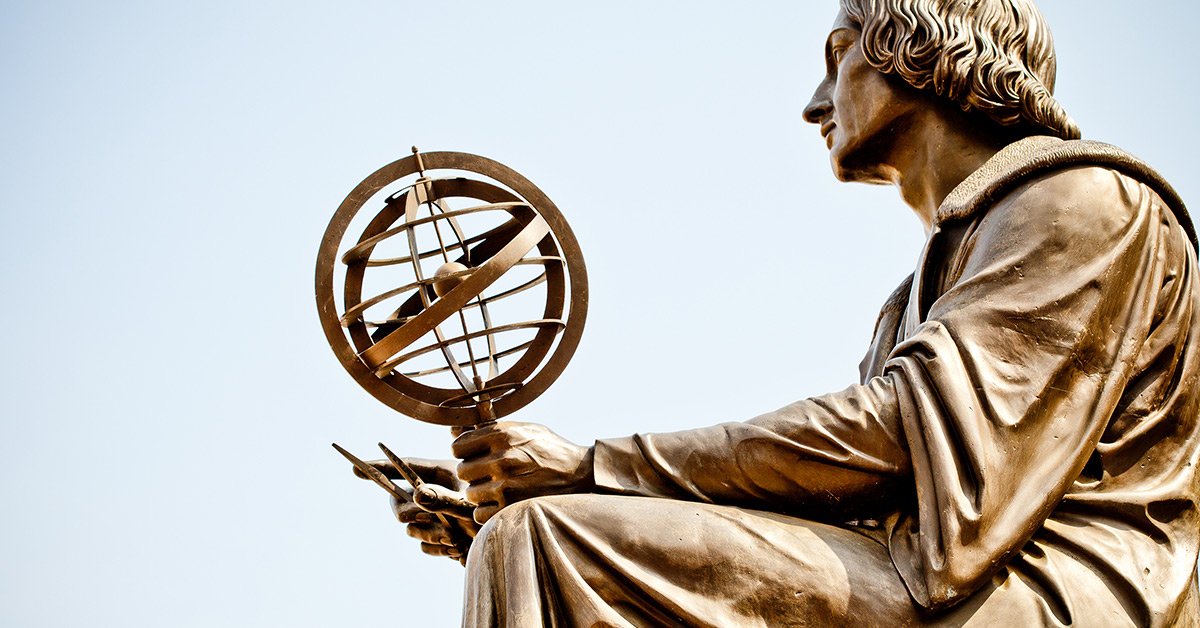 Nicolaus Copernicus was born 547 years ago today (AD 1473). Copernicus often is viewed as the father of heliocentrism (and the Copernican Principle). The belief that the earth is one of several planets orbiting the sun is the heliocentric model.

However, heliocentrism did not originate with him. The earliest heliocentrist that we know of is Aristarchus (310–230 BC). But for 15 centuries before Copernicus, the geocentric model had been the dominant cosmology. So, what then was Copernicus’ contribution?

Copernicus reintroduced heliocentric (Copernican system) cosmology into the modern world, mostly through a book, De Revolutionibus Orbium Coelestium (On Revolutions of Heavenly Spheres), that he published in 1543, the year of his death. But Copernicus had been working on his cosmology for many years prior to publication.

Copernicus was a very accomplished scholar. He completed studies in canon law, medicine, mathematics, and astrology (astronomy and astrology were mingled at the time, though there is no evidence that he ever worked in what we would today call astrology). He even studied economics, apparently being the first to deduce the quantity theory of money and an early discoverer of Gresham’s law (it sometimes is called the Gresham-Copernicus law). Besides practicing medicine, Copernicus was much in demand in government service and as a diplomat.

It is not clear when Copernicus began developing his heliocentric ideas. It was at least as early as 1514 when he wrote his Commentarioulus (Little Commentary). Copernicus never published this manuscript. Instead, Copernicus circulated among a few friends this outline of what would become his book three decades later. It wasn’t until 1878 (centuries after Copernicus’ death) that Commentarioulus was published.

News of what Copernicus was working on spread and his heliocentric ideas began to circulate and to be discussed. For instance, in 1533, Johann Widmannstetter gave a series of lectures in Rome outlining Copernicus’ heliocentric model. In attendance were Pope Clement VII and two cardinals, and they were pleased with what they heard. Three years later, Nicholas Schönberg, Cardinal of Capua, wrote the following letter to Copernicus:

Some years ago, word reached me concerning your proficiency, of which everybody constantly spoke. At that time, I began to have a very high regard for you, and also to congratulate our contemporaries among whom you enjoyed such great prestige. For I had learned that you had not merely mastered the discoveries of the ancient astronomers uncommonly well but had also formulated a new cosmology. In it you maintain that the earth moves; that the sun occupies the lowest, and thus the central, place in the universe; that the eighth heaven remain perpetually motionless and fixed; and that, together with the elements included in its sphere, the moon, situated between the heavens of Mars and Venus, revolves around the sun in the period of a year. I have also learned that you have written an exposition of this whole system of astronomy and have computed the planetary motions and set them down in tables, to the greatest admiration of all. Therefore with the utmost earnestness I entreat you, most learned sir, unless I inconvenience you, to communicate this discovery of yours to scholars, and at the earliest possible moment to send me your writings on the sphere of the universe together with the tables and whatever else you have that is relevant to this subject. Moreover, I have instructed Theodoric of Reden to have everything copied in your quarters at my expense and dispatched to me. If you gratify my desire in this matter, you will see that you are dealing with a man who is zealous for your reputation and eager to do justice to so fine a talent. Farewell.

Copernicus had mostly finished his work on De Revolutionibus as early as 1532. Still, he resisted the urging of many people that he publish it. Why his hesitancy?

Copernicus had mostly finished his work on De Revolutionibus (as the title his book usually is known) as early as 1532. Still, he resisted the urging of many people that he publish it. Why his hesitancy? The most likely reason was that Copernicus feared the criticism that it might generate.

That is hinted at in his dedication to Pope Paul III when the book was published. While Philipp Melanchthon, a close ally of Martin Luther, would eventually criticize Copernicus’ heliocentrism, in 1539, Melanchthon arranged for Georg Joachim Rheticus to study with Copernicus. Rheticus became Copernicus’ sole student and played a key role in the publication of Revolutionibus Orbium Coelestium. In 1540, three years before the release of Copernicus’ book, Rheticus published Narratio Prima, an abstract of the Copernican model, which was the first published work of the new heliocentric model.

The Response to the Copernican System

The prevailing impression is that the publication of Copernicus’ book resulted in immediate criticism, but this is false. Discussion of the Copernican model was already going on, but its release fueled further debate. Most of this discussion was positive.

The eight-year-long Council of Trent convened just two years after publication, and heliocentrism wasn’t even discussed in it. The Council of Trent occurred in response to the Protestant Reformation, and it defined many teachings that the Roman Catholic Church considered heretical.

One contemporary Roman Catholic criticism came from the Dominican priest, theologian,and astronomer Giovanni Maria Tolosani. Tolosani’s rebuttal appeared as an appendix of unpublished work in 1545. The criticism was based upon philosophy, not Scripture. The primary objection was that Copernicus’ approach was contrary to that of Aristotle and Thomas Aquinas. The only other Roman Catholic criticism came 70 years after the publication of Copernicus’ book, and then solely in response to the Galileo affair. Only then, was the Copernican theory branded as heretical.

If the heliocentric model was so gravely flawed, why did it take the Roman Catholic church so long to realize this?

While the Roman Catholic condemnation of Copernicus was very late, the Protestant criticism was not. As early as 1541, Melanchthon was critical, which was two years before publication by Copernicus and was in response to his friend Rheticus’ release of Narratio Prima published the year prior. Melanchthon published a more thorough condemnation in 1549, six years after Copernicus published. Melanchthon’s Initia Doctrinae Physicae was a defense of Aristotelian physics and opposing Copernicanism. For instance, Melanchthon wrote:

Out of love for novelty or in order to make a show of their cleverness, some people have argued that the earth moves. They maintain that neither the eighth sphere nor the sun moves, whereas they attribute motion to the other celestial spheres, and also place the earth among the heavenly bodies. Nor were these jokes invented recently. There is still extant Archimedes’ book on The Sand Reckoner; in which he reports that Aristarchus of Samos propounded the paradox that the sun stands still and the earth revolves around the sun. Even though subtle experts institute many investigations for the sake of exercising their ingenuity, nevertheless public proclamation of absurd opinions is indecent and sets a harmful example.

Melanchthon went on to include what he thought were biblical arguments against heliocentrism, but his primary thrust was philosophical and physical.

So it goes now. Whoever wants to be clever must agree with nothing others esteem. He must do something of his own. This is what that fellow does who wishes to turn the whole of astronomy upside down. Even in these things that are thrown into disorder I believe the Holy Scriptures, for Joshua commanded the sun to stand still and not the earth.

The occasion was dinner on June 4, 1539, when Copernicus’ model came up in conversation. Notice that this was four years prior to publication of Copernicus’ book and one year before the publication of Rheticus’ book. Note that Copernicus’ name is not mentioned. Instead, Luther referred to him as “that fellow.” John Aurifaber’s account of what Luther said is a bit different. He reported that Luther referred to “that fool.” Luther himself did not comment on Copernicus or heliocentrism in his writings, so it must not have been such an important issue to him. Though he didn’t respond to Copernicus, some of John Calvin’s writings reveal that he was a geocentrist.

As previously stated, Copernicus’s model enjoyed open discussion for at least three-quarters of a century. It wasn’t until the publication of Galileo’s Sidereus Nuncius (Sidereal Messenger) that Roman Catholic criticism of Copernicus began in earnest. Why the reaction at this late date? Galileo used the newly invented telescope to view heavenly bodies, and he observed things that contradicted the pronouncements of Aristotle and Ptolemy. Galileo saw Venus go through phases that indicated that it orbited the sun rather than the earth. There were four satellites, or moons, that orbited Jupiter. Everyone agreed that Jupiter moved, but the moons managed to keep up with Jupiter. Aristotle had argued that if the earth moved, the moon would not be able to keep up with the earth as it attempted to orbit, but Galileo’s observation demonstrated that this was false.

Much controversy arose, and at a trial in 1616, heliocentrism was declared to be heretical by the Roman Catholic Church for the first time. Again, what prompted the strong reaction was the introduction of new evidence. Hence, this now was a scientific dispute, whereas before, it had been more of a philosophical point of discussion.

Initially, it was Galileo’s fellow scientists who raised the objections, not the theologians. The geocentrists’ victory was short lived because, within a few decades, nearly everyone in Europe became convinced of the heliocentric theory. Even Roman Catholic institutions soon came to embrace heliocentrism, though it would take the Roman Catholic Church almost four centuries to formally reverse its position. It is interesting that while Protestant criticism of the heliocentric model was immediate and sharp, it faded rapidly. It may have been because the scientific revolution of the 17th century was mostly a product of Protestant Europe.

Remember, the dispute 4–5 centuries ago was more about science than about Scripture. Contrary to what many people believe, the Bible doesn’t teach geocentrism. It’s not that the Bible teaches heliocentrism either.

Some people read geocentrism into Scripture. For instance, the go-to passage for geocentrism usually is Joshua 10:12–14, in which Joshua commanded the sun and the moon to stand still. But does this mean that the earth does not rotate? Hardly. Astronomers talk about the sun moving across the sky, though they aren’t geocentrists. Astronomers also speak of the sun rising and setting (as does the Bible), even though astronomers believe that the earth’s rotation accounts for the sunrise and sunset. So why do people want to understand such passages as teaching geocentrism? Reading either geocentrism or heliocentrism into the Bible is eisegesis, and that is the wrong way to read Scripture.

So, will there be any birthday celebrations today? Probably not, or at least there won’t be many. There were commemorations in 1973 on the 500th anniversary of Copernicus’ birth. The 550th anniversary is just three years away. Perhaps there will be some observances on that round number. But why wait? If you are inclined to a little party, then why not throw one in memory of a great scientist of the past?