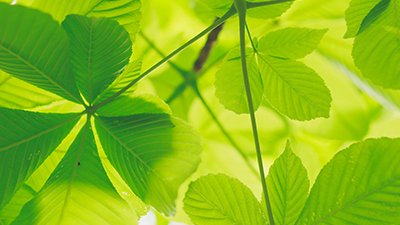 Between concerns about global warming, oil shortages, and increasing gasoline
prices, what can the general public do? Where can we find an alternative energy
source?

Fortunately, the perfect energy source already exists. It’s found in a range
of sizes—from small enough to pass through the eye of a needle to a sky-touching
379 feet (115 meters). And it’s suitable for almost any environment, from mountaintops
to ocean depths. And, most importantly, the main waste product is clean, breathable
oxygen.

This may sound far-fetched, but researchers around the world are inspired
by something they see out their windows. Plants—or, specifically, plants’ photosynthesis.

At creation, God gave plants the ability to transform light into chemical energy;
and since the 1700s, scientists have continuously marveled at this amazing process,
spending hundreds of thousands of lab hours examining the chemical reactions
that make this tranformation possible.

The difficulty lies in the water itself. H2O is a very stable molecule and
requires a great deal of energy to split into oxygen and hydrogen gas. The hydrogen
gas could serve as a clean, burnable fuel, but researchers have yet to discover
an artificial and efficient way to obtain it.

Interest in photosynthesis has blossomed into an international attempt
to replicate the efficiency of this truly green power source.

Recently, interest in photosynthesis has blossomed into an international attempt
to replicate the efficiency of this truly green power source. Two “innovation
hubs” have sprouted on opposite sides of the Pacific Ocean: the Energy Innovation
Hub in California and the Solar Fuels Lab in Singapore. Researchers at both
locations hope to mimic plant processes to develop cheaper alternative fuels.

At the California hub, the U.S. Department of Energy hopes to kickstart energy
innovation through “artificial photosynthesis.” While past efforts to split
water have been costly and inefficient, the Department of Energy plans to overcome
these limitations with a three-pronged attack: finding better light-absorbing
materials, discovering faster chemical reactions, and moving quickly from laboratory
experiments to actual, usable prototypes.1 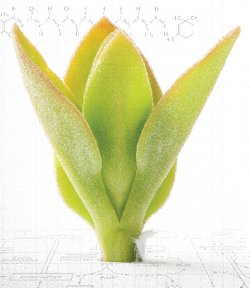 Solar Fuels Lab scientists at Nanyang Technological University in Singapore
are examining the same possibilities. Through “artificial leaf technology,”
the researchers hope to develop an economical way to produce “leaves” that extract
large amounts of hydrogen from water and help reduce the world’s dependence
on crude oil.2

Even with all the technological promise, researchers at both hubs have missed
one major detail—recognition that God is responsible for creating photosynthesis
in the first place. The president-designate at Nanyang Technological University,
Professor Bertil Andersson, misplaces the praise for this incredible design:
“We can learn a lot from Nature, if we look hard enough.” While he’s right that
we can learn from creation, creation should ultimately lead us to awe of our
Creator.

This research will ideally bloom into robust energy solutions. But we should
never forget who is at the root of these endeavors—the real source of all technological
ideas—God, who designed incomparable energy factories right outside our windows.