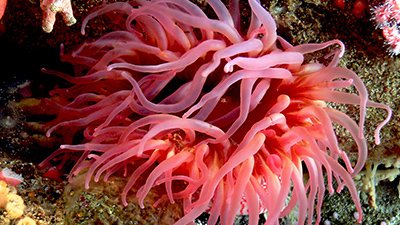 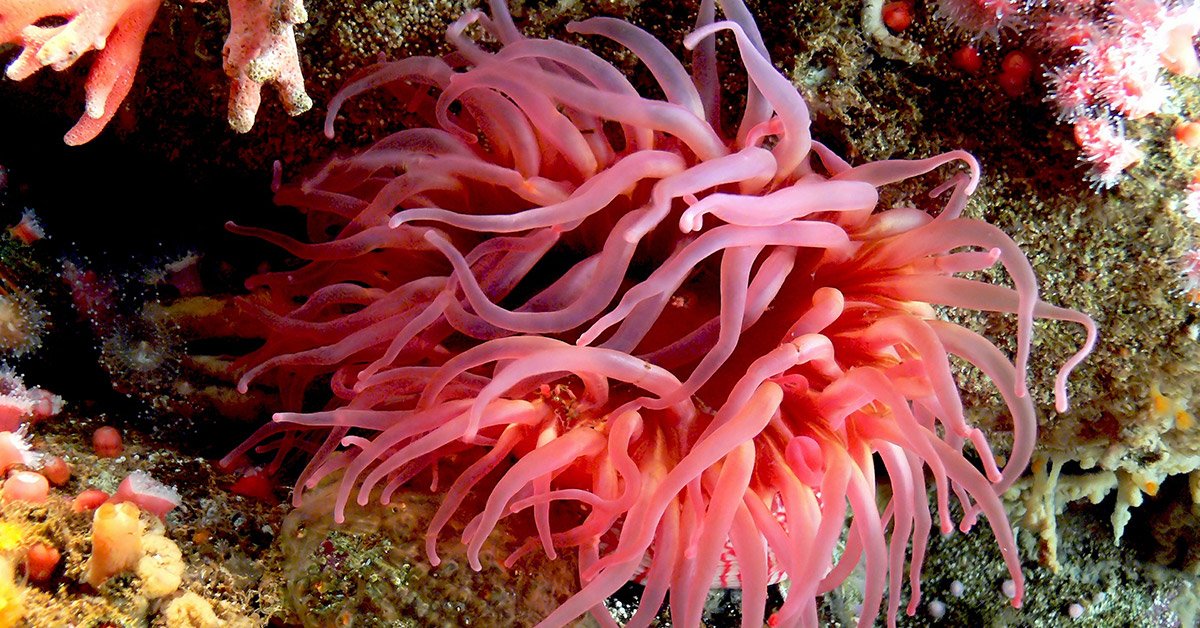 Tube anemones look very similar to the more commonly known sea anemones but are classified in a separate subclass of organisms.

Tube anemones look very similar to the more commonly known sea anemones but are classified in a separate subclass of organisms. They live in tubes of their own construction, which they can pull their bodies into if they feel threatened. As members of Phylum Cnidaria, tube anemones come equipped with special stinging cells in their tentacles. These stinging cells, called nematocysts, are used both to provide defense and capture prey for the anemone.

This recent study sequences the mitochondrial DNA (mtDNA) of two species of tube anemones with the intent of using them to settle some thorny phylogenetic questions within phylum Cnidaria. In the process, they made two very surprising finds. The first was the size of the mitochondrial genome. The mtDNA of one species, Isarachnanthus nocturnus, was found to be nearly 81,000 base pairs in length!1 This is the longest known mitochondrial genome of any organism and dwarfs the human mitochondrial genome, which is a mere 16,569 base pairs in length.2 This prompted one of the paper’s coauthors to say, “These ancient animals have simple behavior and simple anatomy, and so we’ve thought of them as fairly simple creatures until now. But their biology is quite complicated. The genomes of these tube anemones may be more dynamic than those of allegedly more-complex and more-recent animals like snails, insects and vertebrates.”3 In other words, the assumed simplicity of the tube anemones has evaporated.

Another surprising discovery these researchers made was how the mitochondrial genome was arranged. In most organisms, including humans, mitochondrial genomes are circular and are enclosed within the cell’s mitochondria. However, in these tube anemones, the mtDNA is linear.4 This is not unknown in phylum Cnidaria, with members of the Medusa group being reported to have this type of mtDNA, but it is very uncommon across all life.5

These findings raise some very perplexing problems for evolution. The linear nature of the mtDNA causes significant issues in a number of areas. The primary one involves the evolutionary explanation for the existence of mtDNA. The currently accepted explanation among the secular community is the endosymbiont hypothesis. This hypothesis claims that bacteria were trapped inside the cell and instead of being destroyed, became a symbiont within the cell.6 Thus bacterial DNA, which has a circular structure, remains leftover in the cell to this day in the form of circular mtDNA.

This endosymbiont hypothesis leads to a very simple question: why is the tube anemone mtDNA made up of separated linear segments rather than a single circle? If the evolutionists are right and bacteria are the source of mtDNA, then the tube anemones should share the circular mitochondrial genome that most other organisms contain. Yet it does not share this trait, which evolutionists believe has been conserved almost exclusively across the entirety of the imaginary history of evolution. The paper reporting this find makes no effort to explain this problem.

Another problem arises when the phylogenetic studies evolutionists use to try to prove their dogma are examined. Evolutionists commonly use mtDNA as the framework for their phylogenetic trees. Tube anemones are no exception to this rule.7 One study from 2015 claimed that tube anemones were most closely related to sea anemones and some corals, while very distantly related to medusas. Yet the only other members of phylum Cnidaria with linear mtDNA are the medusas.8 This new fragmented, linear sequence and extreme length of the tube anemone mitochondrial genome raises questions about the validity of these previous phylogenetic studies. Linear mtDNA and extreme length makes comparing the mtDNA of tube anemones to the circular mtDNA of other organisms somewhat of a stretch. Interestingly, the authors of the paper noted that the two species (Isarachnanthus nocturnus and Pachycerianthus magnus) they examined did not have similar arrangements of genes on the mtDNA strands.9 It’s almost as if mtDNA is not conserved across evolutionary lineages.

Based on this recent discovery, tube anemones appear to be strong sticking points for evolution. Their mtDNA’s specialized structure and extreme length seem to run counter to the evolutionary phylogenetic studies. Further, the tube anemone’s fragmented, linear mtDNA structure also damages the evolutionary endosymbiont hypothesis for the origin of mtDNA. However, in a creation worldview, the specialized linear structure of the tube anemone mtDNA makes perfect sense. The linear structure likely was put there when the tube anemone kind was created on day five. This makes far more sense than appealing to unfalsifiable phylogenies and an unverified hypothesis about the origin of mtDNA.