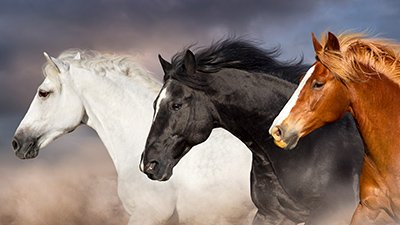 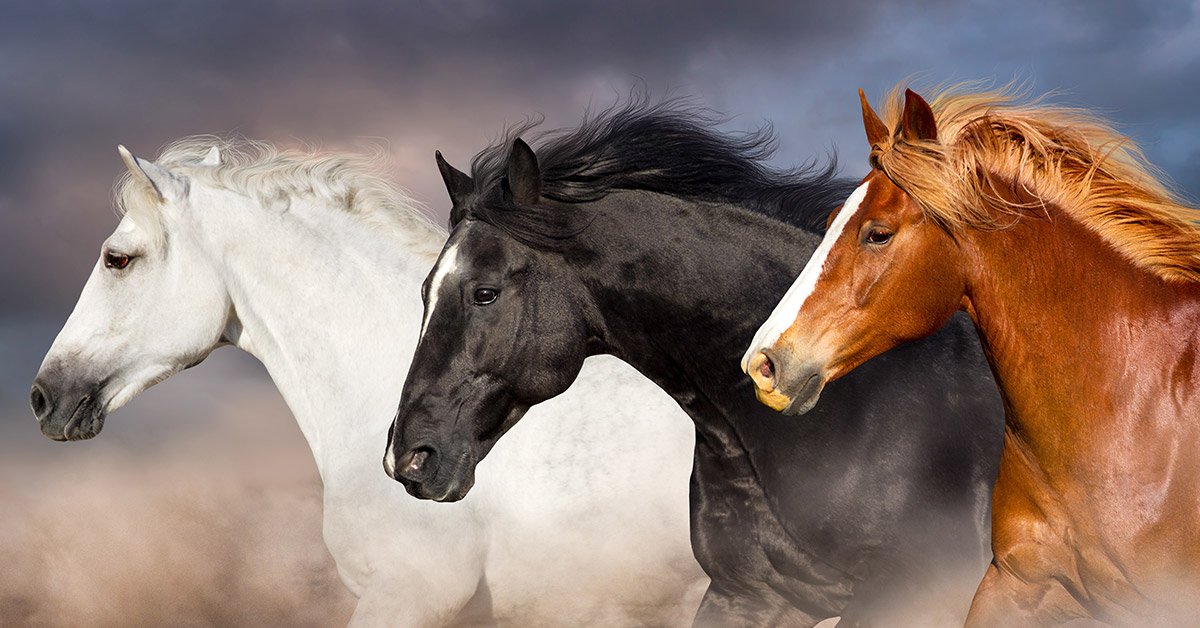 Horses have lost a lot of genetic diversity—much of it within the last two hundred years.

In an attempt to discover the lineage of horses, over one hundred researchers have recently examined the genomes of over two hundred fossil horses and compared them to the genomes of modern horses. Their results indicate that horses have lost a lot of genetic diversity—much of it within the last two hundred years. The average loss among modern breeds of horses when compared to their horse ancestors is over 16%.1 In other words, modern breeds of horses have 16% less available options than their ancestors. For example, the frequency of the gene for slower speeds, which likely has some fitness benefits, has drastically decreased, as humans bred horses for speed. The frequency of coat colors, such as spotted, have also decreased. Even more interestingly, the horse Y chromosome has suffered a similar drop in diversity in the last millennium. It is estimated that the horse Y chromosome has suffered an up to ten-fold loss of heterozygosity2 since Renaissance times alone.3 This would seem to indicate that there has been significant selective breeding since that time. This selection appears to have just been for stallions, as there is no mention of the X chromosome in mares being affected.

This study also postulated that there were two previously unknown horse species that inhabited areas of the world where the domestic horse and Przewalski’s horse are not commonly found, based on genetic analysis of fossils found in habitats where living horses are not found. One of these species, Equus lenensis, is believed to have lived in Siberia. The other is a complete unknown and had never been seen before, yet it exhibited a very different set of mitochondrial DNA. The researchers called this horse part of a “ghost lineage.”4 While speculating that this “ghost” horse may have originated in Iberia, the researchers do not attempt to speculate where this ghost lineage interbred with the rest of the horses.

A Loss for Evolutionists

This study indirectly illustrates just how damaging genetics is to evolutionary dogma. Due to either selective breeding or simply extinction, much information has been lost from the original horse kind. While these researchers did not examine the genomes of zebras or donkeys as part of this study, which are of the same original kind, the information loss they demonstrate is deadly to the evolutionary claims.5 For example, a bacterial genome consists of about 3.65 million base pairs on average.6 The horse genome averages 2.7 billion base pairs.7 To get to a horse from a bacterium would require a nearly a hundredfold increase in the amount of information available to the bacteria. Now, obviously no evolutionist argues that horses evolved directly from a bacterium, but the point remains. Adding that much information, even in the stepwise process evolution proposes, is simply inconceivable. No known natural process can add any information to a genome, let alone increase it nearly a hundredfold.

However, there are several known processes that actively decrease the amount of information in the genome. If a species goes extinct, information is lost. Selective breeding can also remove information. For example, consensus among researchers is that poodles, chihuahuas, and Rottweilers are all descended from a common canine ancestor. Yet compared side by side, they look very little alike and would likely be mistaken for different species in the wild. Each one has had traits emphasized by selective breeding. However, in the process of selective breeding, information, such as that for long legs in chihuahuas, has been lost. Speciation does the same thing. This is why zebras, members of the same kind as horses, are striped, rather than having a solid coat color. In fact, despite evolutionists regularly repeating the mantra that “speciation continues to be so crucial a point as frequently to be considered virtually synonymous with evolution,”8 speciation is not proof of evolution. It is expected variation within the biblical kind and generally represents a loss of information.

Mutations also serve to remove information. In poodles, the information that makes dog’s hair fall out when it reaches a given length has been lost due to mutation.9 This is why poodles need frequent haircuts to remain healthy. None of this is upward molecules-to-man evolution.

This loss of genetic information does nothing to explain the origin of horses.

Applying this knowledge to horses, it is fairly obvious that horses are losing diversity of information. Due largely to selective breeding and mutations, horses have lost a great deal of genetic information, leading to increases in blindness, as well as other diseases.10 This loss of genetic information does nothing to explain the origin of horses. If anything, it challenges the evolutionary paradigm by pointing out yet another example of lost information—the opposite of what’s needed for evolution to work and exactly what a biblical creationist would expect. In fact, when God questions Job about the things he has made, the horse is one of the examples God uses to show Job his power: “Do you give the horse his might? Do you clothe his neck with a mane? Do you make him leap like the locust? His majestic snorting is terrifying” (Job 39:19–20). The horse cannot be understood in light of evolutionary dogma. Instead, the horse genome provides support for the Biblical creation narrative.