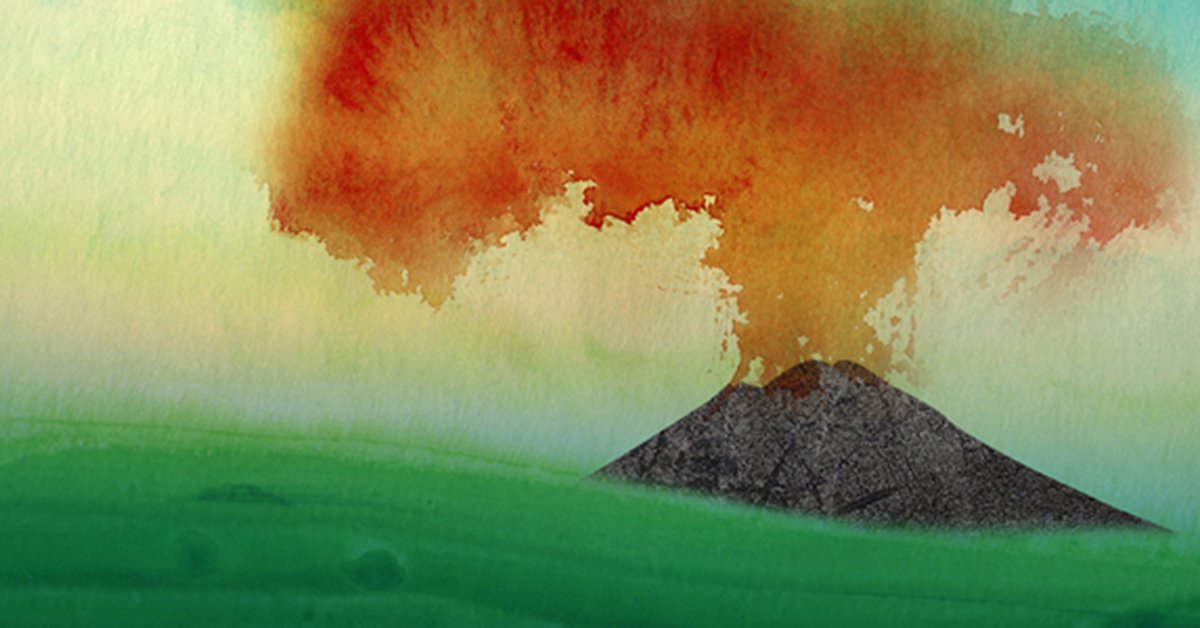 [Editor’s Note: there has been a slight modification to conventional geological thought on this subject, due to a recent news item. For the secular explanation, see this 2019 article. Also see the Addendum at the end of this article.]

There have been many dinosaur extinction hypotheses. For the past 25 years since the discovery and identification of the Chicxulub crater in Mexico’s Yucatán Peninsula, the asteroid impact theory has been the dominant model. There have been a number of scientists who favored the Volcanic Demise hypothesis though,1 and some have even proposed a combination of impact and volcanism.2 A more recent discovery reported in October seems to bolster the latter argument.

The Findings at the Deccan Traps

In its October 2nd, 2015 issue, Science published a report announcing a more detailed study of the many lava flows in the Deccan Traps located in Western India. The Deccan Traps are a massive igneous province—think of it as a lava flood plain—comparable in size to the US states of Oregon and Washington combined and composed of numerous lava flow layers having a total depth of over 6,500 feet (2,000 meters). The strategy was to examine the mineral composition of the lava flows from older samples on the bottom, to younger samples near the top of this thick sequence of lava flows. According to the report, the lava flows show differences in composition, and the timing of their eruption, according to the radiometric dating methods used, coincide remarkably well with the 66-million-year-old conventional date of the Chicxulub impact (within 50,000 years). The volcanic fissures in the area are interpreted to have been active before the impact, but with much smaller eruptive events. Lava flow rates appear to have markedly increased at roughly the same time as the asteroid impact.

The postulated process is that when the impact occurred, it caused either a marked enlargement of a deep-crustal magma chamber or a consolidation of multiple smaller magma chambers into a massive one. This resulted in the eruption frequency decreasing dramatically, but the lava volume per eruption increased so that overall the mean magma volume erupted per unit time approximately doubled.

These lines of tectonic and geochemical evidence all seem to point to a sudden increase in magma flux from the upper mantle source of these Deccan lavas. According to the report,

Straightforward interpolation of the age-volume data suggests that this transition occurred within 50 ky [50,000 years] of the Chicxulub impact and the KPB [Cretaceous-Paleogene boundary, often still called the K-T or Cretaceous-Tertiary Boundary]. This is an even closer temporal coincidence than indicated by previous analyses which also suggested that strong seismic waves produced by the impact could have triggered increased volcanism. The close temporal coincidence of the impact and the accelerated volcanism makes it difficult to deconvolve [separate] the environmental perturbations attributable to each mechanism. The KPB extinctions probably resulted from the superposed effects of both phenomena.3

In layman’s terms, increased volcanism was triggered by the asteroid impact or soon thereafter due to its effects. This would then imply a major contributing role for this volcanism in the extinction of the dinosaurs, presumably because of the increased discharge of particulates and gases into the atmosphere, which would have affected the climate.

What Does the Data Really Show Us?

Evidence of such large-scale catastrophes are yet another reminder that the present is not the key to the past.

As AiG has discussed numerous times previously, radiometric dating methodology is fraught with assumptions and cannot yield an absolute chronology. Therefore the 66-million-year-old asteroid impact date and the up-to-50,000-year lag time for the increased volcanism to have started are rejected as inaccurate. However, these data are useful in providing relative ages, and in essence that’s what this study has found. There appears to be a correlation between the asteroid impact in the Yucatán Peninsula and increased volcanism in India, and, as the study states, the findings “may represent another example of seismic triggering of continental flood volcanism.”4 Of course these scientists are not implying that these events are associated with the global Flood, but are speaking on a regional catastrophic scale over supposed tens of thousands of years following the Chicxulub impact. But do we see volcanism on a continental-wide scale today? No, absolutely not. Today, we do not see such catastrophic volcanic output, where over a mile thickness of lava is spread out over 200,000 square miles. Evidence of such large-scale catastrophes are yet another reminder that the present is not the key to the past. It is also well known and documented that volcanic eruptions can alter the climate of the Earth due to the dust and gases ejected into the atmosphere.5 So again, from a relative age standpoint, this seems to be a reasonable correlation of the data.

How Does This Fit in the Timescale of the Biblical Account of the Flood?

First of all, it should be remembered that asteroid/meteor impacts are not foreign to Flood geology models. A meteor impact or impacts may have been the catalyst which triggered the fountains of the great deep to be broken up (Genesis 7:11). Once this occurred, the catastrophic movement of the tectonic plates which resulted from that breakup would have triggered in turn the release of huge quantities of molten rock onto the ocean floor and on land. Increased volcanism is a natural consequence of this continental breakup event, as molten rock (magma) from the upper mantle rises into the huge rifts in the crust. This volcanism associated with Catastrophic Plate Tectonics (CPT) would have been of unprecedented magnitude and worldwide extent. At the plate boundaries, the magma rapidly rising into the fissures would push the plates apart, so that their separation accelerated to meters (tens of feet) per second. The net result would have been violent volcanic eruptive events on a massive global scale.

At the start and early stages of the Flood, as the pre-Flood seafloor spread, it would have subducted into the mantle. At the same time this was occurring, the resultant tensional stress tore apart the pre-Flood supercontinent. As the tectonic plates spread, mantle plumes produced by return convective flow would have risen through fissures in the crust, causing increased lava flows. Continued barrages by meteors during the Flood would have only exacerbated this process. Sometime after the 150th day of the Flood, the Chicxulub impact and these Deccan eruptions are likely to have occurred. This actually fits the interpretation of the analytical data in Science’s paper that the deep crustal magma chambers suddenly “enlarged” right about the time of the impact.

Secondly, the evidence indicates, as creationists would expect, that dinosaurs didn’t go extinct at the time of the Flood because two of every kind of dinosaur survived on the Ark. The Bible indicates that God brought two of every land-dwelling, air-breathing animal to Noah to take aboard the Ark, and dinosaurs fit that description. Nevertheless, most dinosaurs (which were obviously outside the Ark) did die (by drowning) at the time of the Flood, and the fossil record bears witness to the death of maybe tens of thousands of dinosaurs (and billions of other creatures, especially shallow-water marine creatures such as clams and corals). But we recognize that the continuing declining tectonic and volcanic activity in the first few centuries after the Flood would have had drastic adverse effects on the post-Flood climatic and environmental conditions, and thus may have directly contributed to the eventual post-Flood extinction of the dinosaurs. In fact, it is this combination of tectonic and volcanic forces which would have caused warm oceans and cold continental landmasses at the end of the Flood and continuing on into the subsequent few centuries. The huge volumes of hot water and magmas extruded into the oceans had heated the ocean waters up, which with the dust, ash and gases ejected into the atmosphere from the many huge volcanic eruptions would have caused a “reverse greenhouse” effect. Instead of warming the Earth as a whole, these conditions would have reflected sunlight back into space and cooled it. In fact, this post-Flood one-two punch set the stage for the Ice Age.

So when we view the evidence from a biblical perspective, we recognize that these events occurred during the Flood just over 4,300 years ago, not 66 million years ago, but they profoundly reshaped the Earth.

Again, this is all consistent with the interpretation of the Deccan Traps data: a meteor impact catalyst, increased volcanism during the Flood, and subsequent cooling of the atmosphere after the Flood. When additional evidence from around the world is added, such as that almost every dinosaur fossil found is associated with a watery demise, that the burial of the dinosaurs had to be rapid so that scavenging and erosion didn’t take place, and that dinosaur fossils often have marine fossils associated with them, all the evidence points to a global Flood with cataclysmic tectonics and volcanism both during it and tapering off in the few centuries after it. So when we view the evidence from a biblical perspective, we recognize that these events occurred during the Flood just over 4,300 years ago, not 66 million years ago, but they profoundly reshaped the Earth. The Flood may not have totally wiped out the dinosaurs, but it and its aftereffects set the stage for a radically different post-Flood world, with a totally different climate. This climatic change, with accompanying loss of some less hardy plant species which herbivorous dinosaurs may have relied upon, and other factors probably started the rapid decline and eventual demise of the dinosaurs. Far from “proving” an evolutionary timescale, the evidence deduced from the scientific data about the Deccan Traps corroborates what can be deduced from the Flood account in Genesis 6–9.

While the evolutionary timescale of these events is believed to have occurred within an approximate 800,000 year window—some Deccan lava eruptions before and some after the time of the Chicxulub impact—in a flood geology paradigm, these events all occurred within a very short period. While the Deccan Traps may have continued to produce lava even briefly after the flood and preceding to the ice age (or relatively briefly after the end of the Cretaceous as in this recent news item that presumes the evolutionary paradigm), ten years at most can be postulated between the start of the global flood and the cessation of the Deccan lavas. Even with the new evidence added in, the biblical flood is the best explanation of the geological and paleontological data.