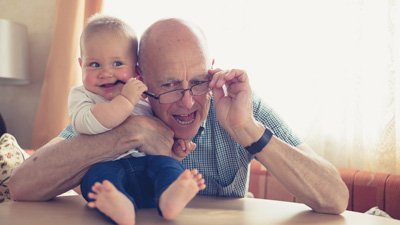 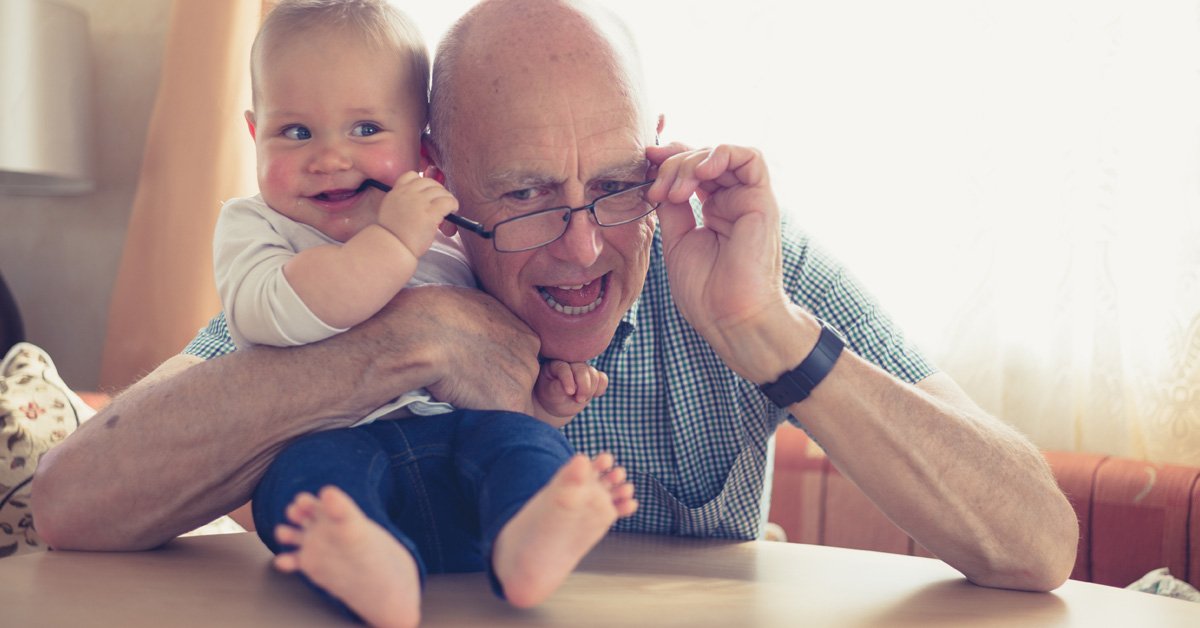 If you’re a grandparent, you’ve lived long enough to experience significant joys. Even so, you may look back at more than a few things that you wish you had done very differently. Looking forward, you may wonder how God can use you in the years ahead.

Not long ago, while studying my Bible chronologically—in the order that everything actually occurred—I was thrilled to discover the storyline of a grandfather who lived a despicable life yet left an amazing legacy. This granddad’s life might best be described as unparalleled self-centered sinfulness. But God brought him to his breaking point, tore away everything of any value, and then waited. When that broken grandfather finally cried out in utter desperation, God generously restored him and allowed him to leave a legacy that impacted several amazing young people whom we still hold up as role models today!

You may have attended church for decades but not yet heard this part of the true account of Daniel’s
flame-retardant friends—Shadrach, Meshach, and Abednego—and the king in whose court they were originally trained.

This true story starts with Manasseh, who was king in Jerusalem for over 50 years. He was incredibly evil. In addition to the terrible things he did to innocent Israelites, he participated in witchcraft and divination, burnt infant sons as offerings to idols, and consulted mediums and wizards
(2 Chronicles 33:6). He built altars for pagan sacrifices in God’s holy temple. Then, in the fifty-second or fifty-third year of his reign, God brought that reign of evil to an end.

God had the powerful, 65-year-old Manasseh captured (2 Chronicles 33:11). His captors put hooks through his nose and forced him in chains to an enemy country. Then, when all was lost and his power was gone, he earnestly cried out to God.

God knows our hearts, and he knew that this cry for help was based on true heart-change.

God knows our hearts, and he knew that this cry for help was based on true heart-change.

God allowed the “new” Manasseh to return to Jerusalem. He regained his throne and authority, and for the next two years, he did everything he could to right the wrongs of his long and evil reign. Men and women watched—probably in disbelief—as he made good on the promise he’d made to God while in Babylonian shackles. Looking back on his life, he may have prayed with concern for those who would lead the country after him. Then, he died.

There was a young grandson who was 6-years-old and second in line to the throne when Manasseh died. We will focus on that grandson in a moment. First, it is important to know that Manasseh’s adult son, Amon, was next up. Although Manasseh had attempted to make right his lifetime of sinful decisions, the tentacles of his evil decades were deeply rooted throughout the land, including a tenacious grip on Amon, who chose to follow the evil, idolatrous ways of Manasseh’s earlier life. But soon, Amon’s servants assassinated him, and his now–eight-year-old son became king. You’ve probably heard of him. His name was Josiah, and God tells us in 2 Kings 23 that no Israelite ruler before or after him turned to the Lord like he did, with all his heart and soul and might (2 Kings 23:25).

But why would an 8-year-old, with all the power and wealth he could imagine, choose to serve God? Truth be told, he didn’t. Not at 8.

Not at 14 when he fathered his first two sons.

In fact, it was not until Josiah was 16 and already had at least four children1 that he began to turn to the Lord!

Understand that the scroll of the Law of the Lord had been lost for generations. Even so, someone had been telling Josiah what they had been told about the one true God. Today, we call that discipleship.

It took years, but when he finally got serious about God, Josiah gave his all.

We don’t know who Josiah’s discipler was—possibly his single mother Jedidah or a godly official, but someone helped guide the fatherless boy to admire and follow the repentant ways of his grandfather rather than the idolatrous path of his father. It took years, but when he finally got serious about God, Josiah gave his all.

Eight years into his reign, at age 16, the youth began to turn to the Lord. When he was 20, he began to purge the land of its many altars and idols to false gods (2 Chronicles 34:3–7).

Then, at 26, he commanded that the majestic Temple, which had been plundered by enemies and desecrated for centuries by idol worshippers, be repaired. It was during this massive labor of restoration that the long-lost scroll of the Law was finally found!
(2 Chronicles 34:8, 34:14–18).2 When it was read to him, Josiah was so shocked and frightened that he tore his clothes and wept (2 Kings 22:19,
2 Chronicles 34:19). He realized how far short his efforts fell compared to what the Creator required. He soon led the people in worship of God unlike any time in hundreds of years, even providing them tens of thousands of his own animals for sacrifice
(2 Chronicles 35:7–9; 2 Kings 23:22–23).

It was about this time that four future heroes of the Old Testament—Daniel, Shadrach, Meshach, and Abednego3—were born. As they grew in Jerusalem and studied in Josiah’s royal court, they undoubtedly were inspired by the intense faith and actions of their king. The four were likely only teens when Josiah was killed in battle against Egypt. “The pillar of faith had gone down.”
4

But the legacy of obedience that started with Josiah’s repentant grandfather Manasseh did not die with Josiah. Why? Had Manasseh taken the kindergarten-age Josiah on his knee at some point during the two years of his restored rule in Jerusalem? Did he directly tell his children’s children of the works of almighty God? We do not know. However, Manasseh’s legacy of obedience now became the legacy of Josiah as well and was carried to yet another generation. In the long caravan of captives forced from Jerusalem shortly after its prophesied fall to Babylon were Daniel, Shadrach, Meshach, Abednego, and others of the king’s court.
5

Manasseh’s legacy of obedience now became the legacy of Josiah as well and was carried to yet another generation.

Josiah knew in his heart that idol worship was wrong, so he crushed the graven images. But when he finally received the actual Word of God, the scroll of the Law, he had more than conscience and feelings; he had the authoritative, written Words of God. Prior to finding the scroll of the Law, he felt that such practices as temple prostitution and homosexuality were also wrong, but once the lost book was read to him, he knew beyond any doubt that these acts were detestable in the sight of God
(2 Kings 23:7“).

So it was probably 15 years or so after Jerusalem fell that with full knowledge of the horrible fiery furnace that awaited them, Shadrach, Meshach, and Abednego refused to bow before the huge graven image which Babylon’s tyrannical ruler required (Daniel 3). Even as everyone around them fell to their faces before the idol, the legacy of Josiah and his repentant grandfather Manasseh may have stood clear in their minds and burned in their hearts. They knew from being taught the scroll of the Law as they were growing up in Josiah’s court, that the Word of God which Josiah read before all the people of his kingdom must be obeyed. They could not bow to the pressure of culture or allow it to sway them from the absolute obedience that they knew had been modeled years earlier by King Josiah in Jerusalem. They did not bow to the idol, but rather stood firm in their commitment and obedience to God!

As a grandparent in the twenty-first century, you may think, “I’m no Manasseh or Josiah. I’m no Shadrach or Meshach or Abednego. What can I do at this point? How can I impact my children and my children’s children? What could I do with only a few more years?”

Friend, be like the repentant and restored Manasseh. Regardless of how you’ve lived to this point, purge your life of attachments to idols within you—certain plans, habits, anything that you give a higher priority than God. And like Josiah, build up the temple—your own spiritual life—by studying God’s Word to know it and be changed by it. When you do, as a Christian grandparent, you are shining the light to your grandchildren.

But don’t stop there. Speak up. “Tell the next generation the praiseworthy deeds of the Lord!”
(Psalm 78:4). Be intentional, beginning with those everyday moments which are windows to the wonders of God—whether it’s a butterfly that stops to feed on the sweet nectar of a beautiful flower in your garden, or the immense yet tiny stars that shimmer in the heavens above your backyard. Once you start looking for these everyday pictures, you’ll find them everywhere. Speak of your Creator and Savior as you go throughout your day. That’s all God requires. Then pray and leave the results to him.

With that kind of vision and intentionality toward your grandchildren, just think what God may do in the years to come!

*For fun, grandchild-friendly Bible facts that cover both the Old and New Testaments, and for more about the connection between Manasseh, Josiah, Daniel, and the “Babylon Boys,” see Dale’s recent book, The 10 Minute Bible Journey. Dale brags on his wife Karen, who wrote the practical article, “Real-Life Ways to Disciple Your Grandchildren.”
https://answersingenesis.org/grandparents/terrible-grandfathers-excellent-legacy/ This article originally appeared on answersingenesis.org