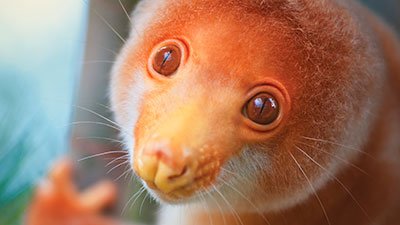 The early morning sunlight filters
through the windows of our rough-hewn
tribal house in Papua, Indonesia.
As our son Kian cooks a pot of
oatmeal and warms himself by the
stove’s flame, the blanket on the couch
quivers. Slowly, a little pink nose
pokes out, twitches, and sniffs the air.
It’s Newt, our loyal (and hungry) pet
spotted cuscus.

She’s a cutie, but what is a cuscus?
(Not the Mediterranean dish—that’s
spelled couscous, but it sounds the
same.) Cuscuses are good-natured
marsupials that roam the lush jungles
in northern Australia and the
Southeast Asian islands (Sulawesi, the
Moluccas, and New Guinea). They’re
also adorable. If they didn’t live so far
off the beaten path, every child would
want one of these gentle fur balls—with their big, round eyes and curlicue
tails—as a pet. At least that’s what our
family thinks!

Marsupials are mammals, many
of which are designed with a unique
pouch to rear their young. Cuscuses
are Australasian possums. They look
and act a lot like opossums in the
Americas (except cuscuses are cuter),
and they fill the same role in the wild.
Cuscuses are gentle, quiet, odorless
(well, most of them anyway), and
quickly potty trained. That makes
them perfect human companions.
This peaceable companionship may
have been one thing the Creator had in
mind when He made them. But after
Adam’s sin brought deadly dangers
into the world, they had to develop
specific strategies to thrive.

Living Above It All

Unlike the American opossum,
which can play dead to confuse predators,
cuscuses scratch and bite to
defend themselves. That’s not always
effective. So most live in the trees.
This offers some protection from wild
dogs, snakes, monitor lizards, birds of
prey, and humans. Furthermore, most cuscuses are active at night, when
most would-be bad guys are sleeping—another wise strategy from the Creator
for surviving in the jungle.

Apart from a safe home and secretive
habits, cuscuses do well (like
opossums) because they aren’t picky
eaters. Most eat a wide variety of
plants, insects, bird eggs, and small
animals. That frees them to wander
around, spreading far and wide
in search of food. Our pet, Newt, has
broadened her palate to include all
manner of human food—especially
oatmeal!

When we watch Newt casually amble
up the ladder to our loft and then into
the rafters, her skill reminds us how
well God designed her feet and prehensile
tail for climbing. Unlike American
opossums, cuscuses don’t hang by
their tails. Instead, they use them as an
extra hand to grab onto branches and
limbs as they climb. I have scrambled
up more than one jungle tree, and trust
me, I could have used an extra hand!
God knew what He was doing when he
designed this tree-dwelling fur ball.

On the cuscuses’ hind feet is another aid in grabbing limbs and climbing—an opposable thumb. These thumbs
don’t have nails like ours, but otherwise,
they look just like our thumbs
and work pretty much the same way.
It is neat to see how the Creator used
the same great design on such different
creatures. The next time you grip a
glass of water or a hammer, remember
the humble cuscus has a good thumb,
too. We didn’t inherit it from each
other, but God gave us a similar special
design to meet our different needs.

An Audience of One

Ever since God called our family to
share the gospel with the tribal people
of Indonesia, we have lived in this
remote jungle. So we get to see lots of
things most people never see, including
cuscuses in their natural environment.
Few, if any, people ever cross
their paths. When a lone human does
wander into their domain, they quietly
peer down from their lofty perches,
unconcerned and usually unnoticed.
So who gets to enjoy these silent tenants
of the deep forest?

Well, they have an ever-present
audience—their Creator! We know
that, after finishing His work of creation,
the Lord looked on all He had
made and said, “It is very good!”
Today, although marred by sin, creation
is still good and praises Him.
The more we seek to understand
nature, the more it undeniably points
us toward the Creator. As we push
deeper into the remotest places of the
earth, we are constantly delighted by
unexpected evidences of His hand at
work. Studying God’s creatures, from
the showiest peacock to the unpretentious
cuscus, should lead us to praise
the one whose wisdom created it all!

Hunters in our jungle can
easily track cuscuses because
they are creatures of habit.
They like to poop in the same
place, at the same time, every
day! If a hunter comes across
a pile of cuscus poop, he just
has to wait until dusk when
the unsuspecting little guy
comes out to do his business.
Then . . . it’s roasted cuscus
(with couscous, maybe) for dinner! 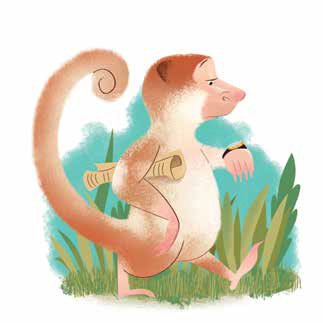 A mother cuscus can bear up to three young at a time but usually has
one or two. They are born in just 13 days and weigh no more than 1 gram
(about as much as a paperclip) at birth. They stay in the mother’s pouch
for about 6 months—much like a baby kangaroo.

Unlike American opossums, cuscuses don’t hang by their tails. Instead, they
use them as an extra hand to grab onto branches and limbs as they climb. 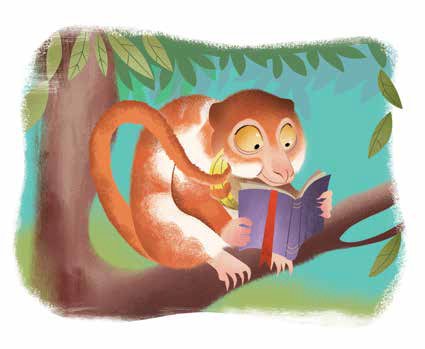 Mike Wild is a missionary to tribal people in the jungles
of Asia Pacific. He and his wife serve the people and are
working to translate the Bible into their language. His
children share the excitement of missionary life in a popular
DVD series The Wild Brothers.