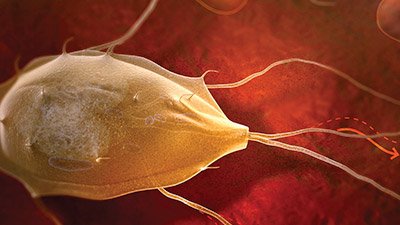 Inspiration sometimes strikes from the most unlikely directions. Who knew that
a well-known parasite might lead to the next major breakthrough in medical treatment?

A group of scientists at the University of Tennessee are leading the way to
understand how microscopic creatures (primarily Giardia lamblia) move
through the bloodstream. The goal? Construct micro-robots that can navigate
the dangerous twists and turns of the bloodstream. Only worldclass swimmers
can make it to their intended destination in this foreign environment. So scientists
want to study the very best.

If robots can imitate the swimming abilities of Giardia, doctors could
send them on any number of special missions, such as site-specific drug delivery
and breaking up kidney stones. The technology promises many nonmedicinal benefits,
too (for example, better maneuvering of large underwater vehicles).

Why the focus on Giardia? One scientist involved in the research, Dr.
Mingjun Zhang, stated, “Giardia seems to be one of the most sophisticated
swimming microorganisms and is very efficient and intelligent in terms of controlling
its swimming behavior and energy utilization. It is a source rife with bioinspiration
and innovation.”1 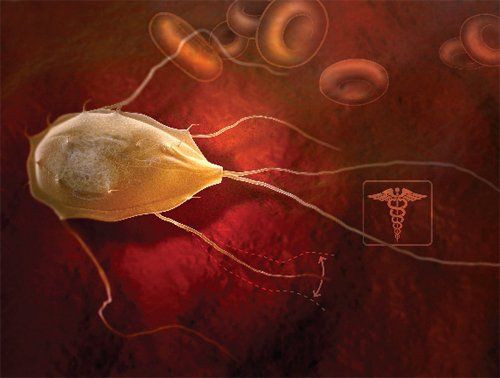 Who knew that a well-known parasite might lead to the next major
breakthrough in medical treatment? Giardia is a source that is full of inspiration.

Giardia, a single-cell organism known as a protozoan, attaches to the
small intestine and causes a form of diarrhea called giardiasis. This disease
causes abdominal cramping, vomiting, and a fever that can last for days. Though
the protozoan now causes great harm in our fallen world, there’s no denying
that its motors are elegantly designed!

Not just one, but four pairs of flagella (tentacle-like arms) extend from its
body. They enable Giardia to swim with a rotating motion, much like that
of a beater on an electric mixer.

Giardia is unusual in that it can infect many different types of hosts—both
humans and animals. The key to its versatility is that each of the four pairs
of flagella has different movements and functions, allowing it to infect very
different types of hosts. Two pairs act like “flexible paddles,” similar to
paddles on two sides of a canoe. Another pair moves with a wave-like action,
like snakes moving through water. This pair is important for attaching to the
host’s cells. The last pair does not seem to move at all! However, they run
almost the entire length of the body and increase the flexibility of the tail
end, which appears to contribute to the cell’s overall movement.

All the flagella work closely together when the Giardia nears its host
for attachment. Like a spaceship preparing to dock, the motors stabilize and
direct the body, as it hovers into position above the cell surface. The flagella’s
ability to direct precise movements excites robotic engineers.

Dr. Zhang, the scientist mentioned earlier, also stated, “This [each of Giardia’s
flagella] is the result of a robust design from millions of years of evolution.”2
This statement is ironic considering that he had previously described Giardia
as “sophisticated,” “efficient,” and “intelligent.” Complex biological machines
like the flagella cannot evolve in a step-wise fashion via random mutation over
millions of years, as Darwinian evolutionists postulate. If even one small part
of the biological machine were not present, the organism would quickly die.

Although Giardia causes disease, this was not the case before the Fall.
God’s original design for Giardia was likely that of a beneficial symbiotic
(mutual support) relationship, like so many other microorganisms today. Giardia
is an amazing example of God’s complex design in a seemingly simple organism.
Even in our fallen world, the Great Physician shows us many inspiring designs—including
those in a parasite—that doctors can use to help the sick. 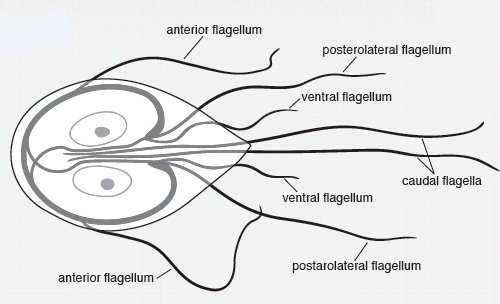 The fast-moving, single-celled organism, Giardia lamblia, has a unique
combination of paired “whips” (flagella) that give it incredible maneuverability.
Like oars on a ship, the forward oars (anterior) and side oars (posterolateral)
propel the body quickly forward with powerful, rotating strokes. When it reaches
its destination, the motion changes to a back-and-forth motion, allowing Giardia
to hover over its target and “dock.” Meanwhile, the back whips (ventral flagella)
beat in a wave motion. Could miniaturized motorized vehicles be built to imitate
this amazing design?